More than 170 Wilson students presented the results of their undergraduate and graduate research covering a variety of disciplines and topics at the College’s 10th annual Student Research Day, held Friday, May 3. 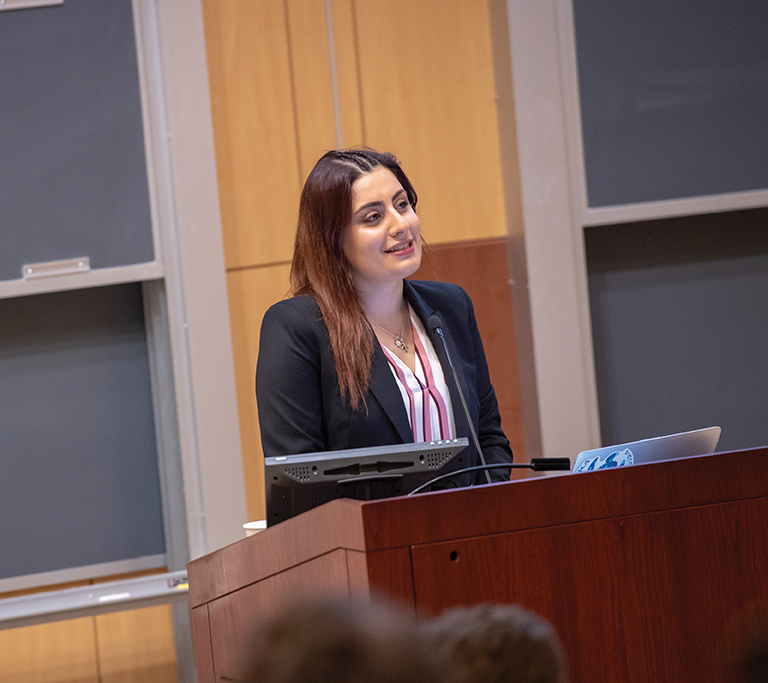 Twenty-seven students gave oral presentations based on their work, which was produced in conjunction with faculty advisers. Another 54 students participated in performance presentations and more than 100 students presented their work graphically in a poster session. Sessions were held in a number of campus locations, including the Brooks Science Complex and John Stewart Memorial Library.

The final presentation of the day was from 2019 Disert Scholar Elen Harutyunyan ’19, an Armenian citizen whose research project, In the Shadow of 1915: Post-Genocide Identity Preservation among Argentine- Armenians, investigated the process of identity formation, development and preservation following genocide. Her project was supported by a variety of qualitative data, including ethnographic research.

The Armenian Genocide, sometimes called the Armenian Holocaust, was the systematic extermination of 1.5 million Armenians, mostly citizens living in the Ottoman Empire. The killings and deadly deportations resulted in the mass migration of Armenians to other countries, including Latin America, from the 1920s to 1950s, according to Harutyunyan. Argentina is home to the largest Armenian “diaspora”— Armenian natives living outside of their homeland— in South America. Harutyunyan spent last summer in Buenos Aires, interviewing three different generational groups to examine the impact of sociocultural trauma on the Argentine-Armenian community.

“It was a very big journey for me, a life-changing experience that allowed me to grow both personally and professionally,” said Harutyunyan, whose own family was deeply affected by the tragedy. She said she feels an obligation to tell the story of the mass killings and deportations of Armenians “to try to prevent it from happening again.” 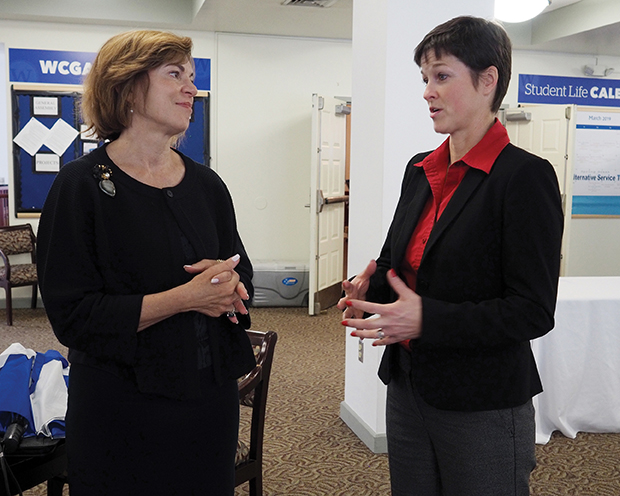 Single Parent Scholar Program is Model for Others 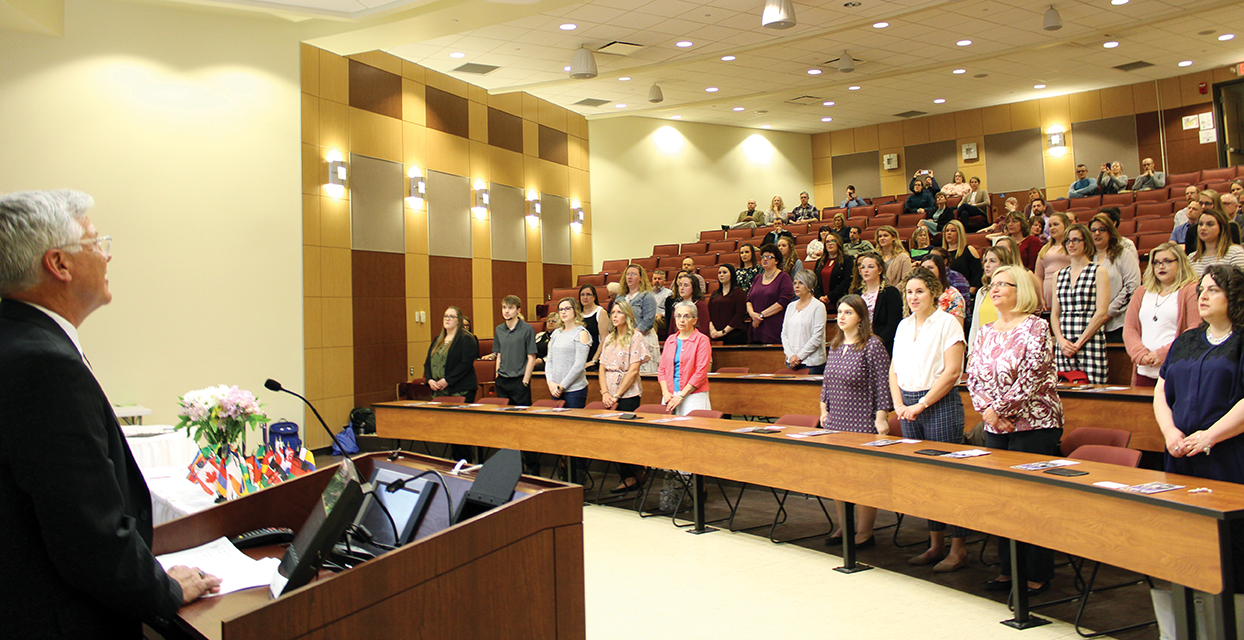 Being accepted into Sigma “is really quite an honor and testament to the quality of Wilson’s nursing program,” said Sherri Stahl, senior vice president of hospital services for WellSpan-Summit Health and Wilson’s honor society president.

Wilson’s chapter, Omega Eta Chapter of Sigma, was officially welcomed into the organization by Kenneth W. Dion, assistant dean of business innovation and strategic relations at Johns Hopkins School of Nursing. He told the audience that Sigma has more than 135,000 active members in more than 530 chapters in over 90 countries around the world. It supports nurses throughout their careers and collaborates with organizations to improve the health of the world’s people.

“This is a big deal because it elevates the profession of nursing in this community,” said Julie Beck, director of Wilson’s nursing program and chief nursing officer as well as honor society faculty counselor. She said this honor reflects well on the quality of Wilson students and the community in general.

At the same event, 53 nurses and nursing students were inducted into the society. Sigma “only extends membership to students who have demonstrated superior academic achievement, academic integrity and professional leadership potential and to nurse leader candidates exhibiting exceptional achievements in nursing,” Dion said. “Our membership includes top-notch nursing executives, clinicians, educators, researchers, policymakers, entrepreneurs and others.”

“You have met or exceeded the rigorous standards required to receive an invitation to join Sigma, and you truly deserve our congratulations,” Dion told the inductees.

All the inductees are either current students enrolled in or graduates of Wilson’s nursing program.

Wilson College held its annual academic awards ceremony on Friday, May 3, in the Brooks Science Complex, concluding a day of recognizing academic excellence that began with the 10th annual Student Research Day. 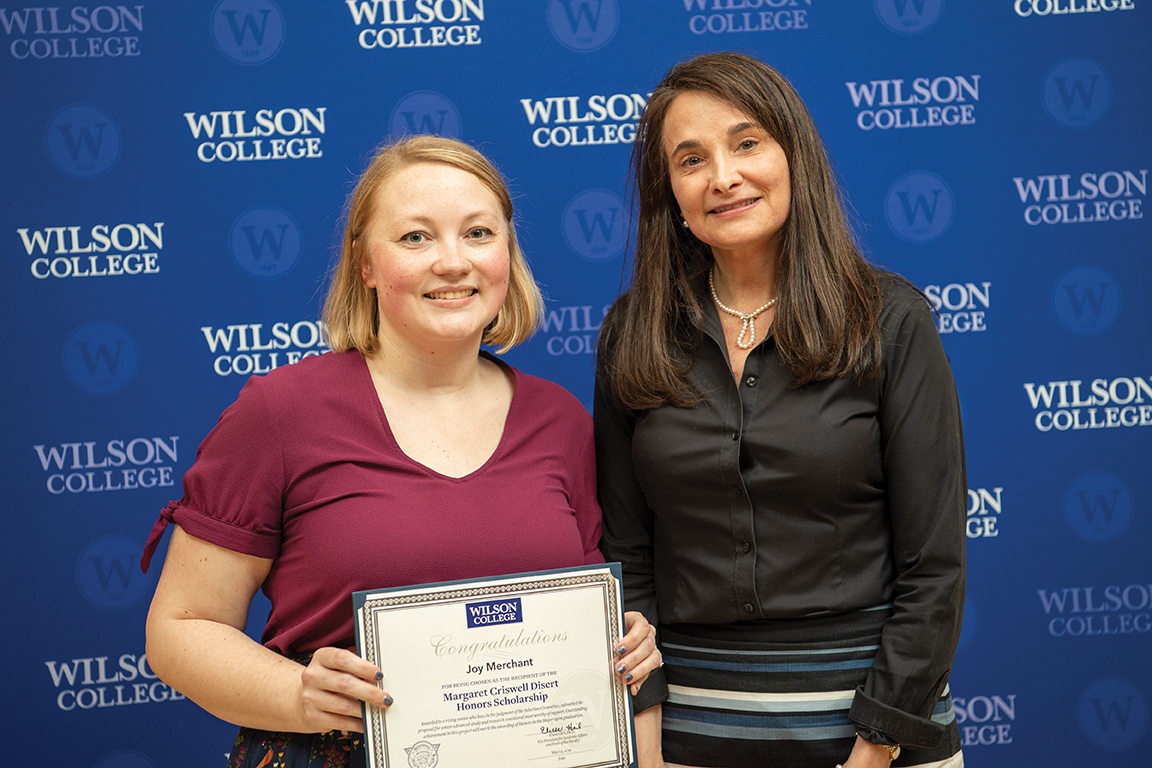 Considered Wilson’s most prestigious academic award, the Margaret Criswell Disert Honors Scholarship is granted by the selection committee to the proposal for senior advanced study and research considered most worthy of support. This year the committee awarded it to Joy Merchant ’20. Merchant, who is majoring in English with a concentration in creative writing, proposed researching the human brain. She plans to use the research to inform a collection of short, creative nonfiction essays focused on the mind.

Baseball returned to Chambersburg’s iconic Henninger Field on Saturday, April 6, when the College and state and local officials dedicated the field as the new home of Phoenix baseball. The celebration served as the official kickoff of an 15-month commemoration of Wilson’s 150th anniversary. 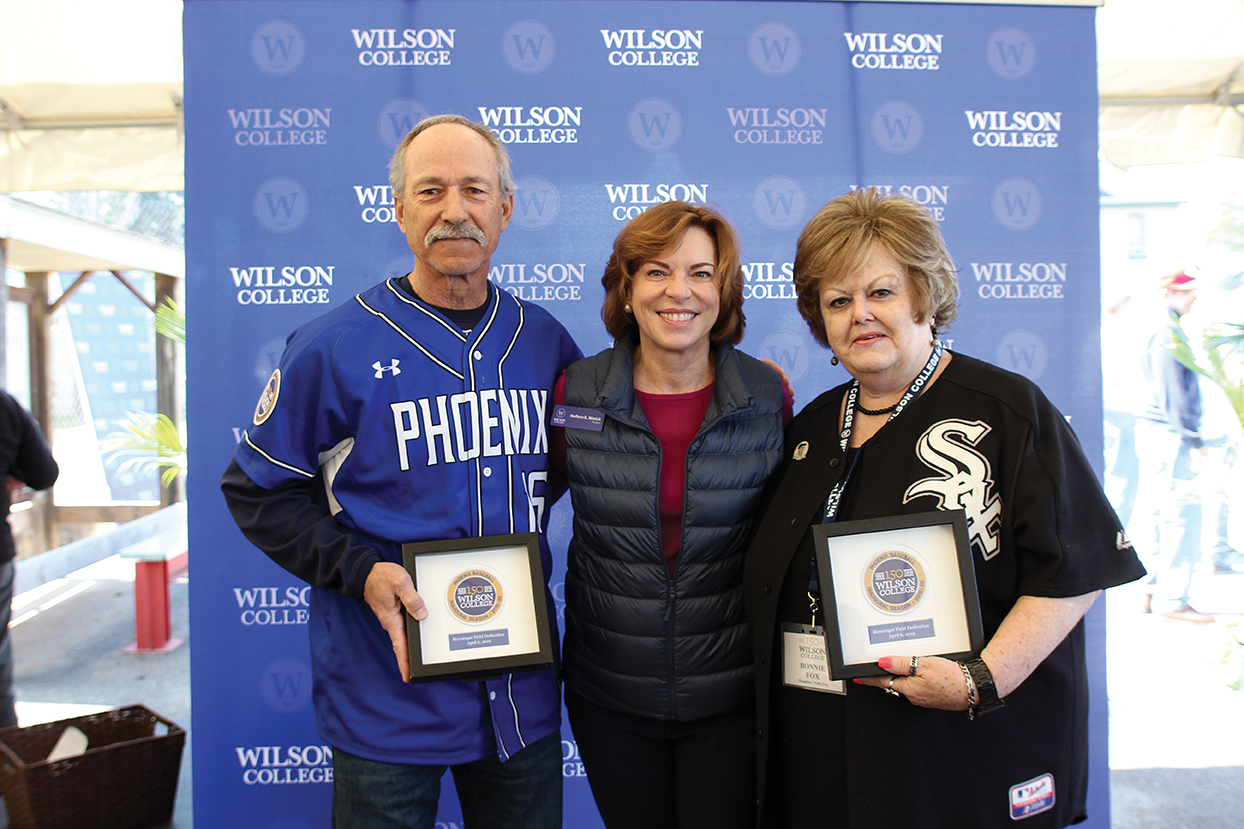 The dedication featured remarks by President Barbara K. Mistick, Borough of Chambersburg officials and area lawmakers, as well as local baseball legends or their families, including retired major leaguer Tom Brookens and the families of the late baseball Hall of Famer Nellie Fox and Clay “Pop” Henninger, for whom the field is named.

“The dedication of such a legendary local ball field as the home of Wilson’s first men’s baseball team seemed like the perfect time to launch our Sesquicentennial festivities,” Wilson President Barbara K. Mistick told an enthusiastic crowd of college and community members, alumni and local baseball fans.

After the dedication, the Wilson Phoenix took both games of a doubleheader against the Clarks Summit University Defenders by scores of 9-0 and 4-2, respectively.

Organized baseball had been played at Henninger Field from 1895 to 2010, after which the borough-owned field on Vine Street—tucked into a neighborhood off Philadelphia Avenue south of campus—began to decline. Wilson, which has a 10- year lease agreement for exclusive use of Henninger, pumped approximately $250,000 worth of improvements into the field to bring it into compliance with NCAA specifications for baseball. The borough also completed some updates to the field’s public restrooms, moved electric lines and removed trees, according to college officials.

“It’s been a rewarding experience to partner with the Borough of Chambersburg to restore Henninger Field and bring baseball back to the park, where area residents can once again come to enjoy the games,” said Mistick.

During the dedication, State Rep. Rob Kauffman (Pa. District 89) read a proclamation marking Wilson’s Sesquicentennial. Wilson College was chartered by the Pennsylvania Legislature on March 24, 1869, followed by a formal opening on Oct. 12, 1870.

Besides commemorating the reopening of the field, the festivities also highlighted the College’s strengthening partnership with Chambersburg. “This project is just one example of how the College and borough government can work together to benefit the entire community,” said Mistick, whose remarks were echoed by local elected officials.

Henninger Field is steeped in local baseball lore. The most famous baseball game there took place the afternoon of May 31, 1929, when the New York Yankees played an exhibition game against the club’s farm team, the Chambersburg Young Yanks. Baseball greats Babe Ruth and Lou Gehrig played for the Yankees that day and in the fifth inning, Ruth thrilled the crowd when he lofted a three-run homer over the center field fence.

The development of Henninger Field as a thriving center of baseball in Chambersburg is credited to Clay Henninger (1855- 1930), a local player-turned-manager who coached the field’s Chambersburg Maroons home team for many years. Henninger— whose great-granddaughter, Ann Henninger Trax, is a 1968 Wilson graduate—became a local legend and in 1920, the ball park was named in his honor.

You can see photos of the Henniger Field event here.

As the academic year came to a close in May, several campus construction projects got underway, including replacement of the single-lane bridge leading to the equestrian center, farm and athletics fields. The bridge project, which was delayed nearly a year due to the lengthy permitting process, began with tree removal and equipment staging. College officials expect it to be completed by the middle of September.

The new bridge spanning the Conococheague Creek will have two lanes and a pedestrian walkway. The widened bridge will greatly improve access to the western part of campus for emergency vehicles, sports team buses and horse vans.

The bridge, which was approved for a total cost not to exceed $1.8 million, is being funded with a $1.5 million gift from Thérèse Murray Goodwin ’49 and funds from the College’s capital budget.

While the bridge is out, alternative routes to the rear of campus are available off Siloam Road and Commerce Street.

Two other projects, which together will add a total of 106 new parking spaces on campus, are planned:

• In late June, construction crews began removing the Art Annex and the Helen M. Beach ’24 Veterinary Medical Center. After demolition, the area will be graded, paved and lined to provide 64 additional parking spaces.

• In early July, crews will begin work on the five tennis courts located next to the new veterinary education center. The two courts closest to the Hankey Center will be reconfigured for multipurpose athletic use, such as tennis, basketball and pickle ball. The other three tennis courts will be converted to 42 additional parking spaces.

Other planned summer projects include the modernization of second-floor bathrooms in Riddle Hall and a facelift for the patio outside of Sarah’s Coffeehouse, as well as the porch above. Plans include a significant amount of painting and some minor repairs to the building’s fascia and spouting. This work will be finished well before New Student Move-In Day on Aug. 22, officials said. 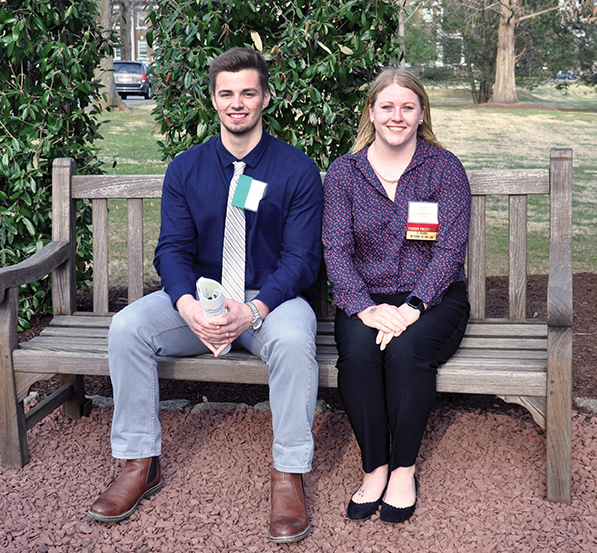 Two seniors presented the results of their research at the 95th Annual Meeting of the Pennsylvania Academy of Science (PAS), held March 29-31 at Cedar Crest College in Allentown, Pa. Zachary McMaster of Gettysburg, Pa., presented his research project, “Analysis of the Effects of Pre-operative Physical Therapy on Range of Motion in Individuals Undergoing Total Knee Replacements,” and Katelynn Gilbert of Thousand Palms, Calif., presented research on “Short-term Characterization of a Biofilm in a Free-flowing Freshwater Creek in South-Central Pennsylvania.” The students were accompanied to PAS by the following faculty members and faculty advisers: Deb Austin, Abigail Berkey, Brad Engle, Dana Harriger, Tonia Hess-Kling, Katie Sarachan and Rachael Zhu.

In 1995, 20 students and the college chaplain at the time headed to Drift, Ky., during spring break to rebuild homes for the elderly poor, resulting in Wilson’s first Alternative Spring Break. 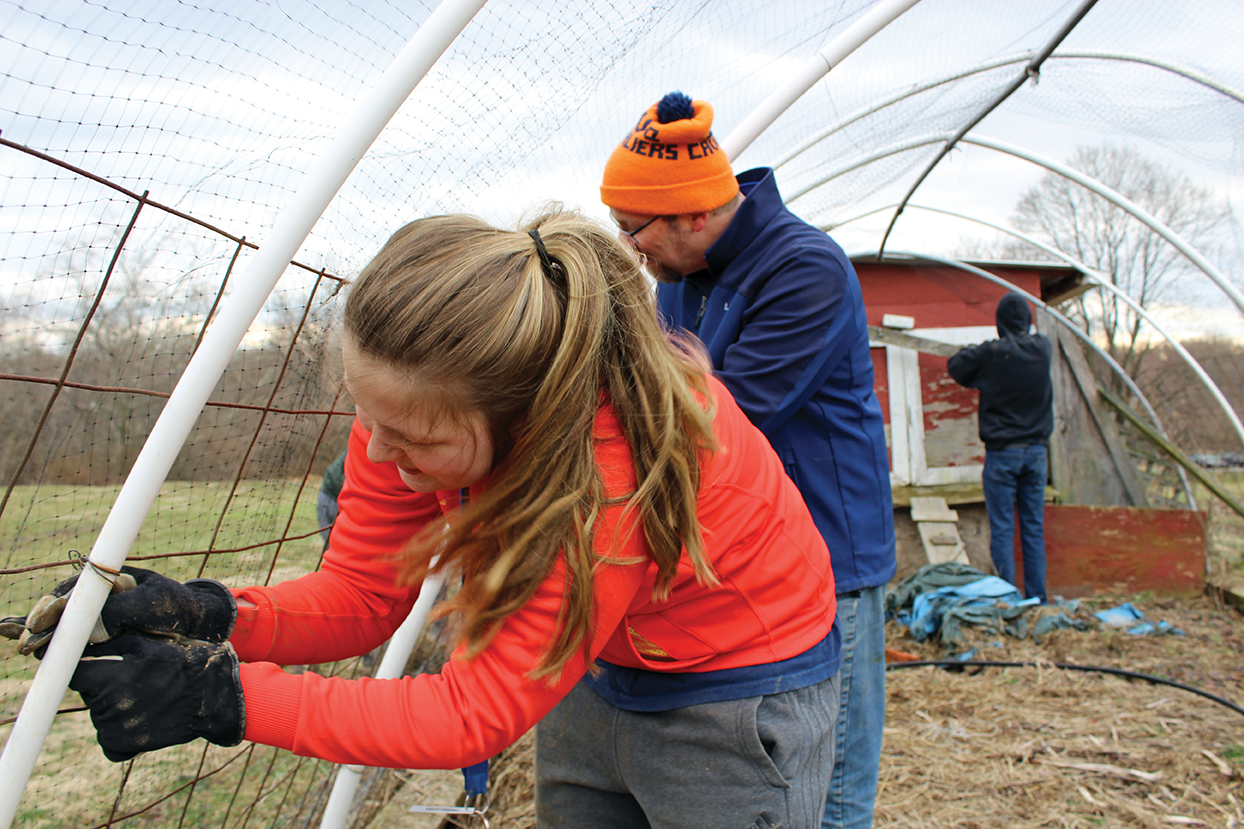 In the 24 years since that Kentucky excursion, participating Wilson students have given up their spring break to help others in places like Princeville, N.C.; Washington, D.C.; St. Petersburg, Fla.; and many others. They have helped rebuild communities following natural disasters, offered comfort and aid in homeless shelters and given families a new start by working on Habitat for Humanity homes.

This year, students were again invited to give up their break to help others, but instead of traveling to lend a hand to those in need, they focused on work they could do in the local community.

“I wanted them to learn to ask the question, ‘What can we do to help?’” the Rev. Derek Wadlington, Wilson’s chaplain, said. “By staying in and around Franklin County, we were able to show our students the amount of need here at home and the myriad ways they can make a difference in their own backyard. And we demonstrated to the local community our commitment to making our region a better place for our residents.”

“While the work at times felt mundane to us, it allowed the students to see firsthand that a handful of people willing to give a few hours can have a major impact on small nonprofit organizations,” said Wadlington. “Taking on that mundane task allows leadership to spend time on another need, or to plan for something new.” 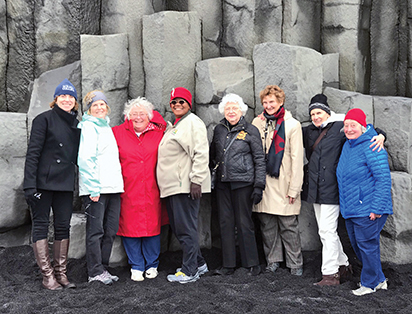 In late April, President Barbara K. Mistick traveled with a group of eight Wilson alumnae and 11 of their friends and family members, as well as two Trustees—Nancy Washington and Robin Bernstein. The trip was sponsored by the Alumnae Association of Wilson College. The group spent three nights in Iceland’s capital city of Reykjavik and toured the island nation’s lava fields, hot springs, glaciers and waterfalls. In this photo, the group stands on the black, volcanic sands of Reynisfjara Beach in front of basalt sea stacks. From left, President Mistick, Kathe Scanlon ’62, Bonnie Morris ’69, Faye Wilson ’77, Loretta Hunt Marion ’61, Kathy Shannon ’72, Grace Felicetti ’61 and Joanna Gardner ’63. Barbara Santosusso ’72 is missing from the picture. The trip marked Marion’s last trip as head of the AAWC Travel Committee, a post she held for 12 years.