A student tries to solve the mystery of who her Aunt Sarah is.

When Kelly Shank ’22 arrived as a first-year at Wilson, she already knew many alumnae through her sister, Katie Shank ’19, M ’21 ’22, who works for the Office of Institutional Advancement. She also knew about the Aunt Sarah/Uncle Wilson program and wanted to participate. 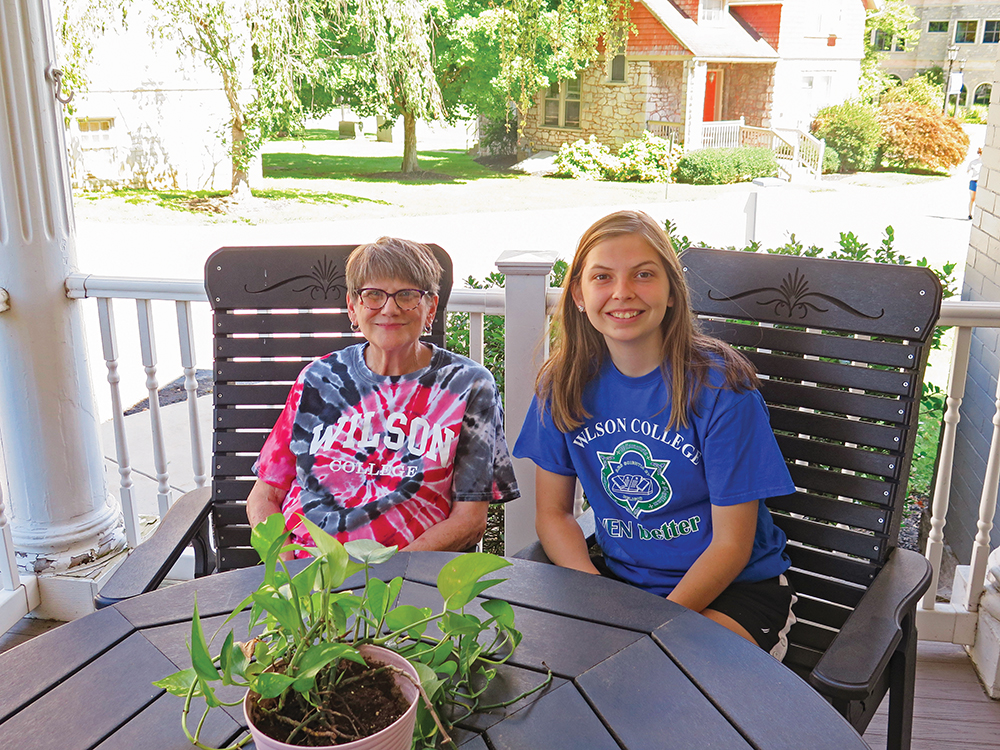 Cindy Fink Barber ’73, who has been an Aunt Sarah since its inception and now helps run the program, knew Kelly and wanted to be her anonymous “aunt.”

Begun in 1979 by Carolyn Trembley Shaffer ’50, the Aunt Sarah program paired alumnae with students. The alumnae “aunts” would send messages or gifts to their student “nieces.” The purpose was to support and encourage students who might be feeling lonely or who could use a friendly voice from afar. Shaffer ran it until 2009, whereupon the program took a hiatus. It was resurrected in 2012 by Sharon “Shay” Jaymes Falk ’93, then taken on by Elizabeth “Liz” Heyer ’10 & ’14. Thereafter it has been run by the Alumni Relations (AR) office. In 2014, “nephews” and “uncles” were added to allow male alumni and students to participate.

Traditionally, “Aunt Sarah” was a secret connection with hints and clues to discover identities. However, over the years, with new technology, many have decided to email, text, FaceTime, Skype, or even meet face-to-face for ongoing interaction. A secret connection is still possible with letters or packages going back and forth through AR. For many, the real tradition is that someone provided this connection to you as a student, and now, as an alum, you keep the program alive.

In this case, Cindy wanted to keep her aunt role with Kelly anonymous. Thus began an elaborate and complicated campaign to keep the cat safely in the bag and not give Kelly any clues as to her identity. It wasn’t helped by the fact that Kelly suspected Cindy from the beginning. Through imagination and enormous effort, Cindy succeeded in remaining a secret up until she revealed herself at the Ring-It-Forward ceremony just before Kelly’s graduation this year.

Cindy has had so many nieces and nephews through the program she has lost count. But she has never had a relationship blossom the way hers and Kelly’s has. “I can only think of two times in all the years I’ve been doing it that a niece or nephew responded,” Cindy said. “Some alums get upset that they don’t get a thank you note or ever hear from their niece or nephew. I go into the program thinking I am doing something for a student on campus. I can make their year better just by sending a card or a little gift card.”

Kelly was a very unusual niece. Not only did she send a thank you note, but throughout the pairing sent notes and gifts too. “I didn’t know Cindy was my aunt, but getting packages periodically and letters and someone checking up on us is nice,” Kelly said. “I don’t have grandparents living, so having someone who is more like a mentor is great.” Whenever she got a package from her aunt, she replied with gifts of her own and humorous notes. “We had quirky stuff that we sent back and forth. Like, we both sent crazy socks. I mean, she sent me a whole advent calendar of socks one year for Christmas. It was so much fun to have these random packages show up.”
Cindy had to take extreme measures to deflect suspicion. She had her packages sent by friends from out of town and even different states in case Kelly looked at the postmark for clues (she did). Nonetheless, Kelly suspected Cindy was her aunt. “I know a lot of alums, and I thought it was this person and then this person. And then one time, I really did think it was Cindy.”

Kelly had just received a pair of socks featuring images of pancakes from her aunt. She and Cindy were having lunch, and Kelly casually asked her where she had found the pancake socks. “I thought, oh, she knows!” Cindy said. “Pancake socks? What are you talking about? Pancake socks? I played it off like I didn’t know what she was talking about.”

Cindy was so convincing that Kelly believed her. For the three years that they were aunt and niece (Kelly graduated early), they met often and talked about everything, and unbelievably Cindy maintained the deception.
“I went into the Ring-It-Forward ceremony knowing that Cindy would be there too, but I didn’t know she was my aunt,” Kelly said. “I sat down next to her, and she handed me a package and said, I’m your Aunt Sarah.”
They may not be aunt and niece anymore, but you would never guess it from their relationship, which has continued to blossom beyond the program. They continue to hang out regularly and have become friends as much as “Wilson relatives.”

“I’m definitely considering becoming an aunt this year,” Kelly said. Cindy is proud that her “niece” will be part of the ongoing program and hopes she will inspire some of the younger alums to take up the mantle. If you are interested in becoming an aunt or uncle, contact the AR office at aroffice@wilson.edu or (717) 262-2010.