Joan McCulloh ’52 graduated with a major in English literature and a minor in history. After 39 years of teaching English to high schoolers, in retirement, McCulloh has indulged her passion for history, specifically local history. As a member and former president of the Mercersburg Historical Society, she has written numerous articles on local history and regularly leads historical tours. More recently, her passion led her to Wilson’s Hankey Center for Women’s History. 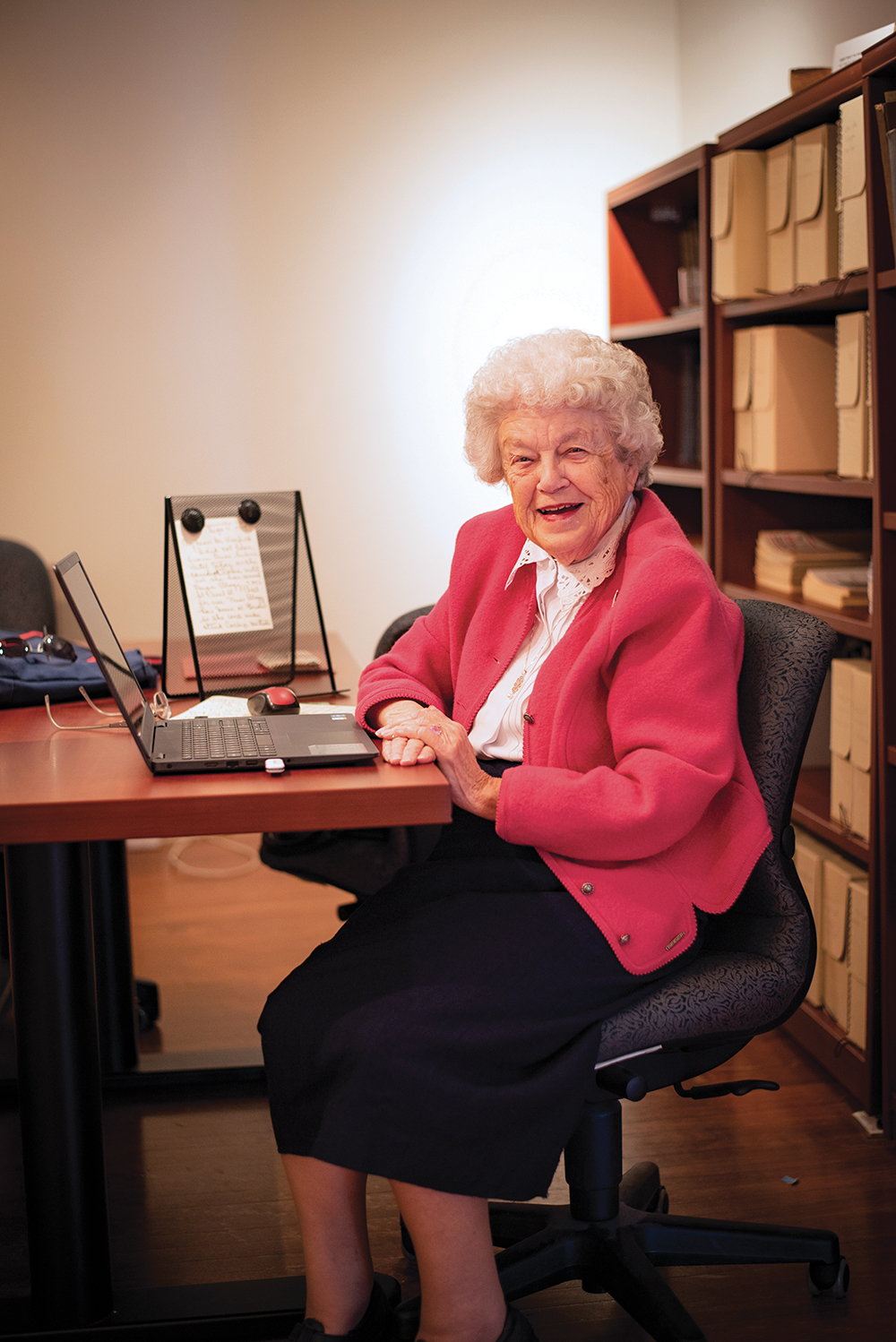 Since 2019 McCulloh has driven to campus every week to transcribe letters between former Wilson presidents Reaser, McKeag, and Warfield and staff members. The presidents’ letters are mostly typed copies of the originals; the letters from the staff are often handwritten and can be a challenge to read. Each staff correspondent has an individual physical file containing all the letters between them and the administration. As you can imagine, files vary in size depending on how long the person was at the College. For example, Librarian Mary Louise Erskine’s file is one of the thickest, as she worked under all three presidents.

She transcribes the letters onto her laptop, summarizes them, then uploads everything to the digital archives. It’s an enormous amount of work, but McCulloh loves it. She is reminded of a quote by novelist L.P. Hartley, “The past was a different country; they do things differently there.” The letters give insights into a different era and the personalities of those who worked at Wilson. She says, “It’s a social history of Wilson and of these young women who taught here — it shows what the times were like and what these people were like.” She hopes future scholars of the College or women’s history will find these archives insightful and informative.

The files cover the College’s history from the 1900s to the 1920s. She pulls out a large file box filled with manilla folders, each dedicated to a single correspondent she has yet to transcribe. She looks forward to discovering what these new files will reveal.

Of the presidents, Dr. Anna McKeag, Wilson’s first woman president, is her favorite. “I think McKeag must have been an extraordinary person.” She explains that McKeag was very supportive of her staff, even arranging teaching schedules around train schedules for a teacher from Carlisle and always supporting staff whose families suffered illness or death. When an incident, possibly unsavory (we have no details of the incident), occurred at the Chambersburg theater, McKeag arranged to have “moving pictures” shown on campus from then on.

Of the staff members, McCulloh has a soft spot for French teacher Clara Maude Syvret. She taught during the McKeag presidency, then “became a ‘Field Secretary.’ That meant this dear soul went by train and bus all over Pennsylvania, New Jersey, and a bit of Ohio, trying to encourage students to come to Wilson.” Her correspondence records the frustrations of a woman not always welcomed. “She tried her very best, and sometimes high schools were not very amenable to her coming into the school to talk.”

There are others who were not McCulloh’s favorites. “I wouldn’t have wanted to work with [German teacher] Virginia McComb. She was very demanding. President Reaser must have been a man of infinite patience. For a while, in addition to teaching German, she was raising money for the College. She told him exactly what to do and how to do it.” During World War I, Wilson stopped teaching German and let McComb go. However, she stayed in Chambersburg and, after the war, ran a successful company taking Americans on European tours.

And these letters are full of small details that McCulloh finds humorous. One teacher, who considered herself a serious scholar, was easily distracted and complained that she couldn’t concentrate because of “the monotonous sound of engines and beheading of seventy chickens” interrupting her work. Apparently, the College had a flock of chickens and, every week slaughtered a good number of them close to this scholar’s rooms. Another teacher who had never been further south than New York City before she arrived in Chambersburg reported that her family thought this was in a different country.

For the most part, the correspondence captures the “mutual respect” between the staff and administration. “Their personalities were different, but they were gracious and considerate in their letters,” she said. “It was a different country, and yet the teachers were interested in what teachers have always been interested in — the number of hours they were to teach, what was in the curriculum, what was good about the curriculum, and what they thought should be improved. That part hasn’t changed one iota.”

McCulloh is pleased to be able to give back to her alma mater. “I have great respect for Wilson College. It did a great deal for me.” There is a huge trove of materials at the Hankey Center yet to be digitalized. “It would be nice if someone else volunteered,” she said. “It takes time, but it’s worth it. I enjoy it and will do it as long as I can.”

ISSUE: Fall/Winter 2022 CATEGORY: Around the Green TAGS: alum
RELATED: Firsts Giving the Gift of Curiosity Where in the World Was Wes?

Move-In Day 2022
On August 25, 94 of our first-year and transfer students moved in, most with help from their families or friends. Some of them are pictured here. Days earlier, on August 18 and 21, 23 new student-athletes and 16 new exchange and international students moved in. In total, we have 301 students living in campus housing. 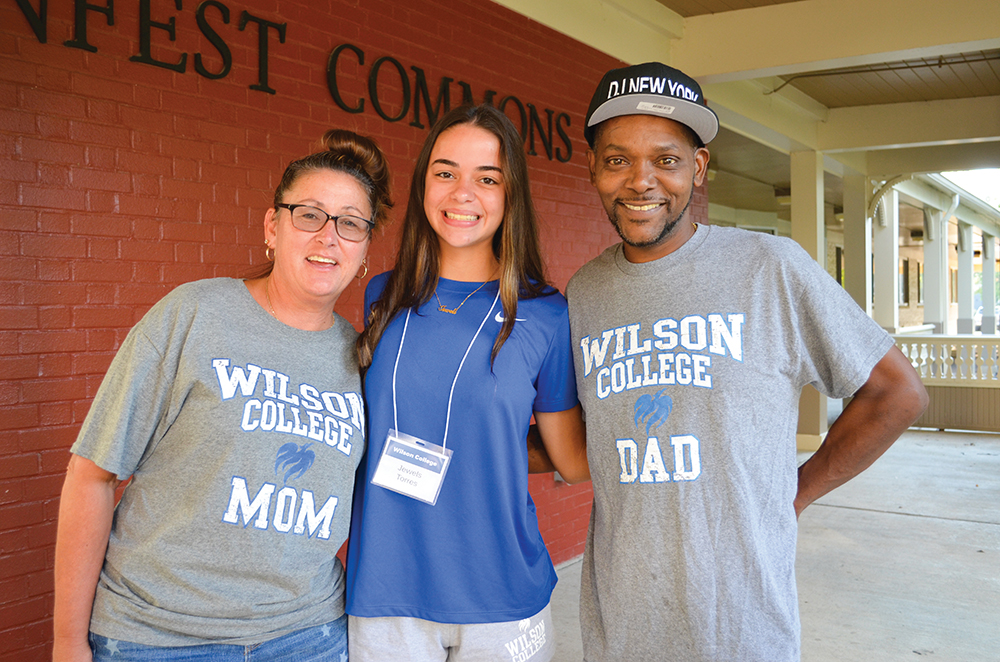 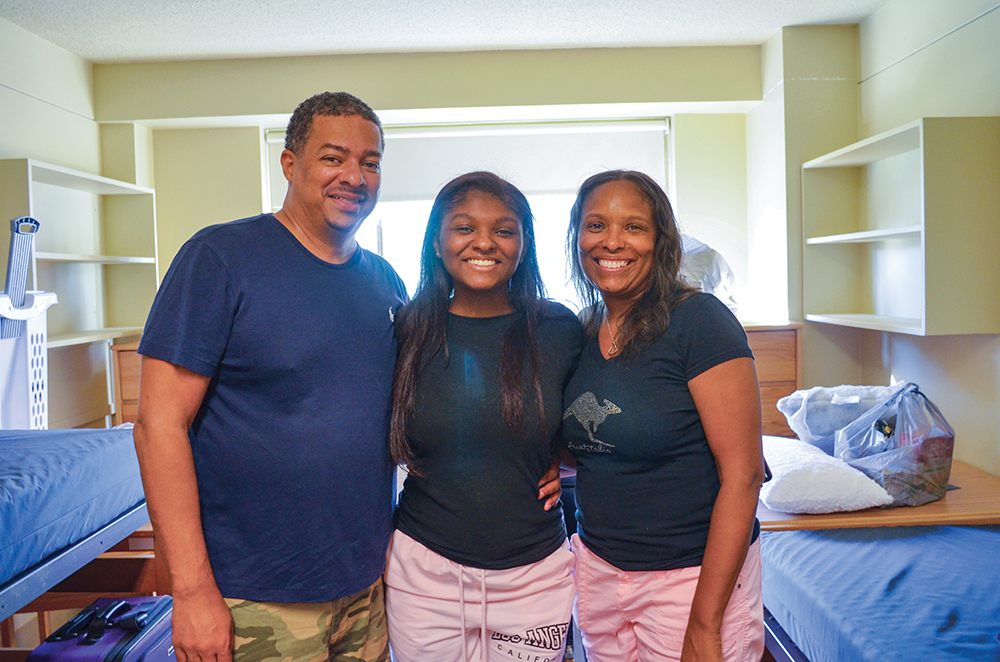 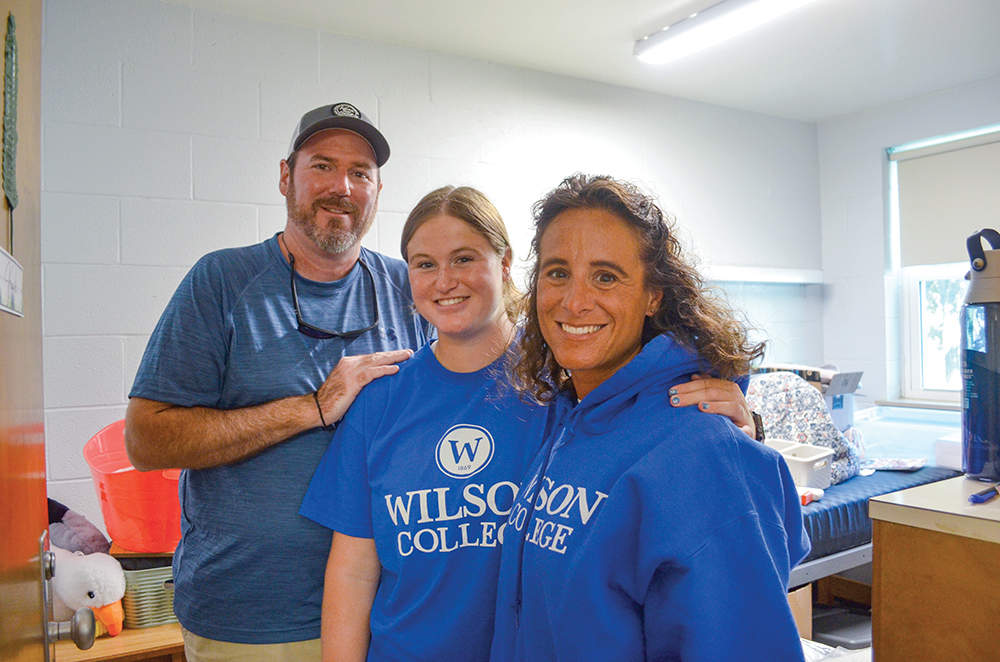 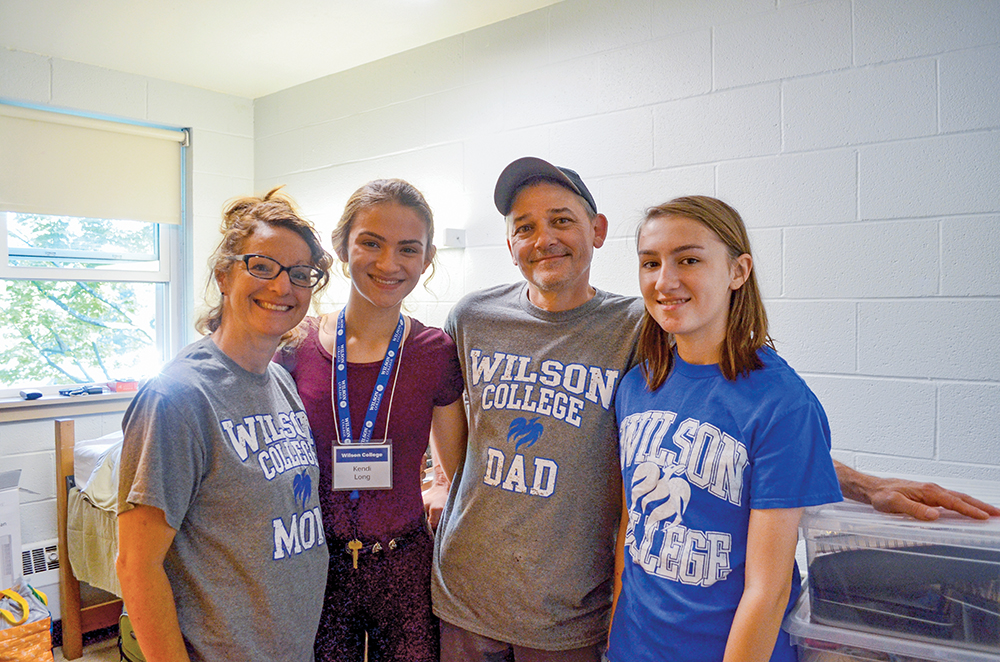 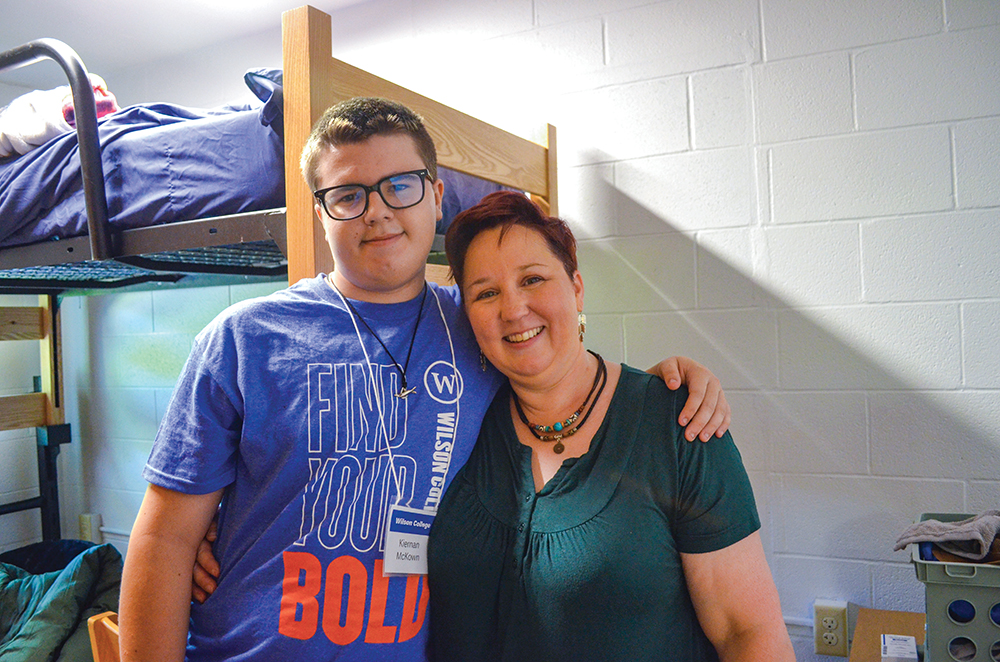 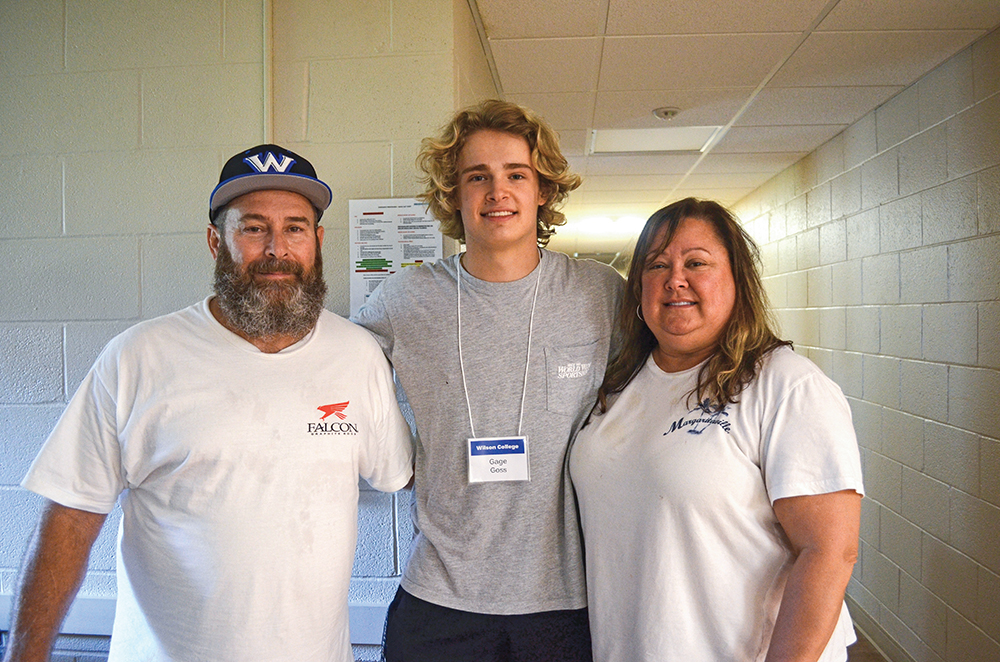 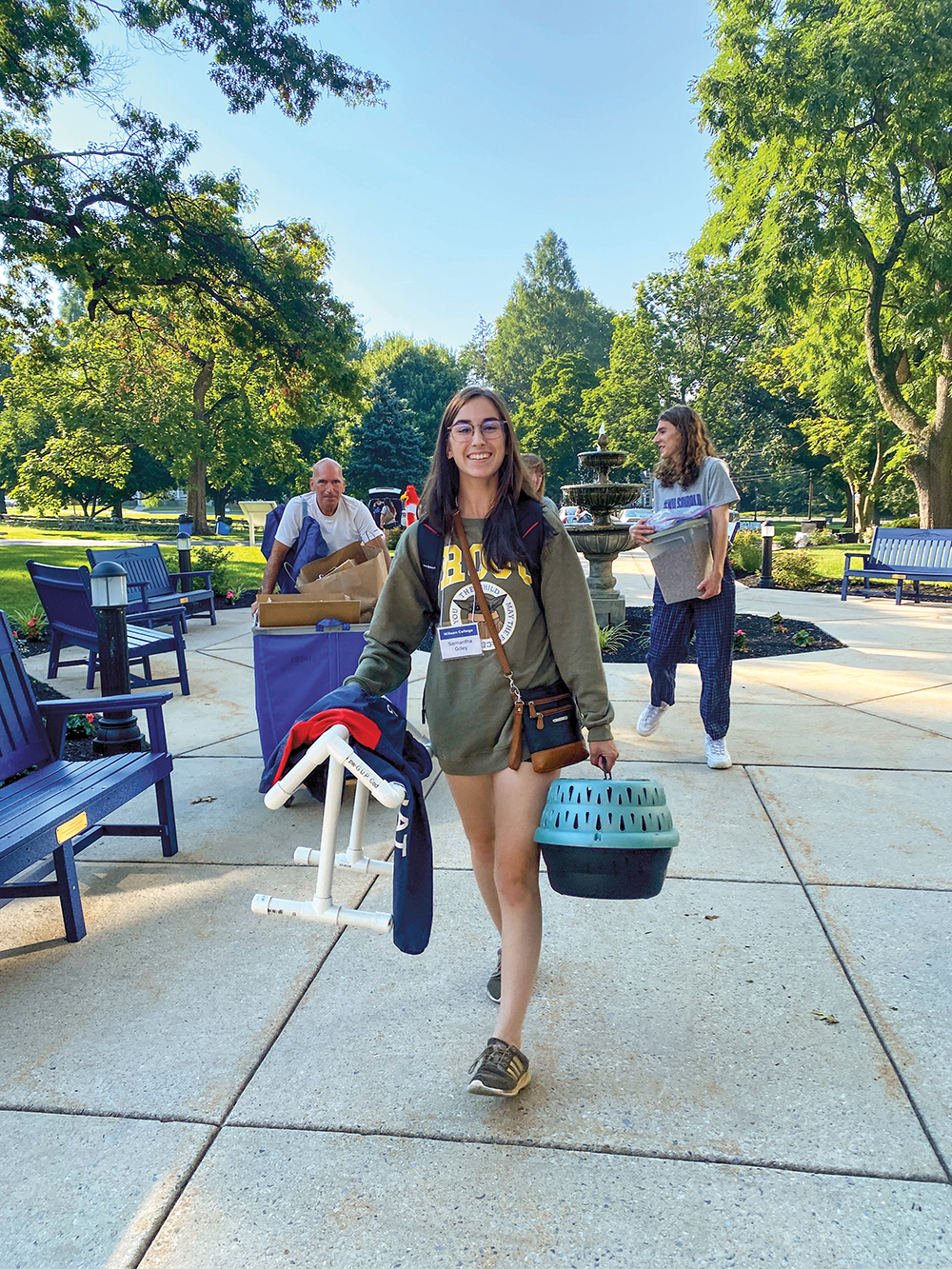 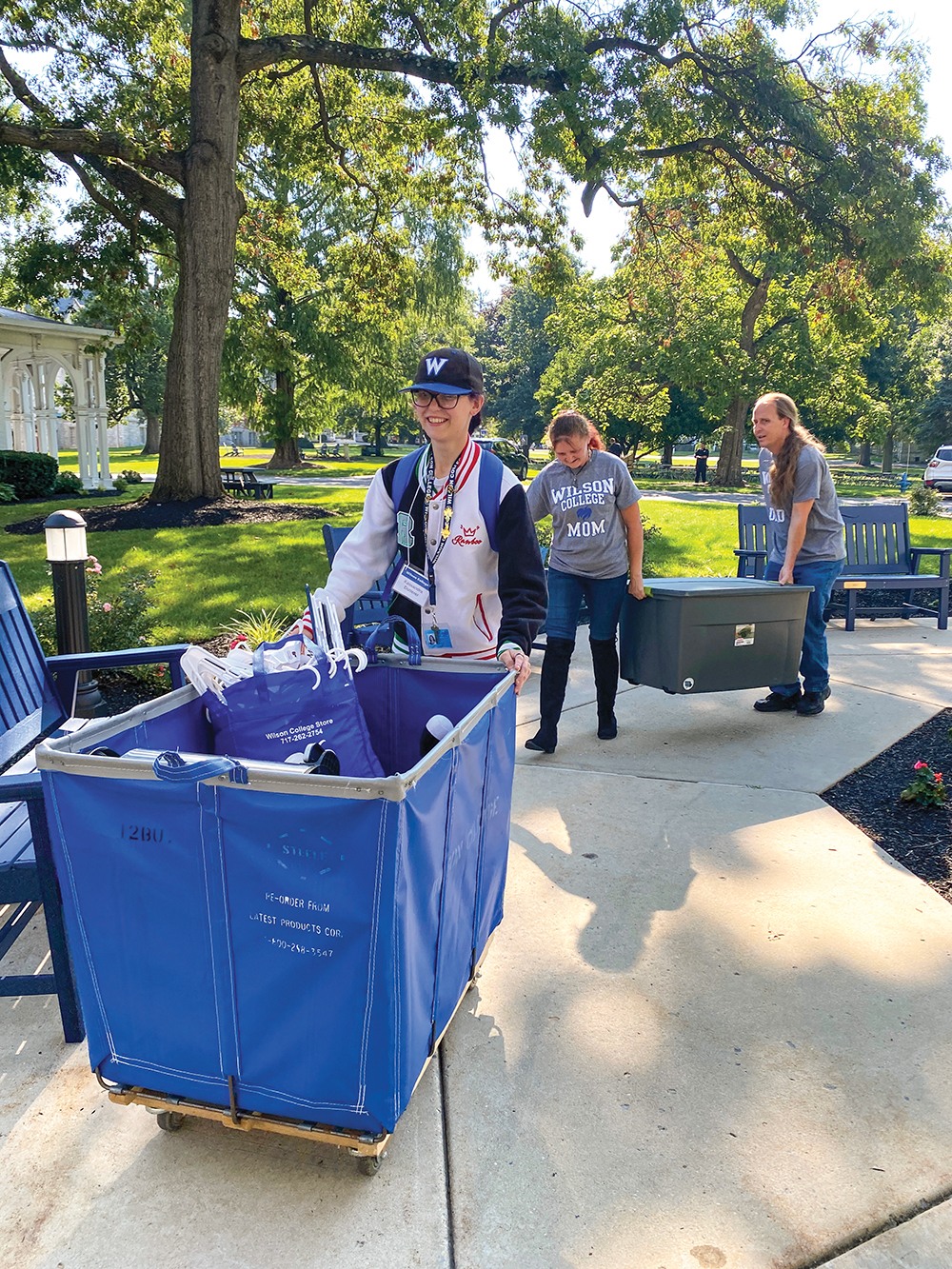 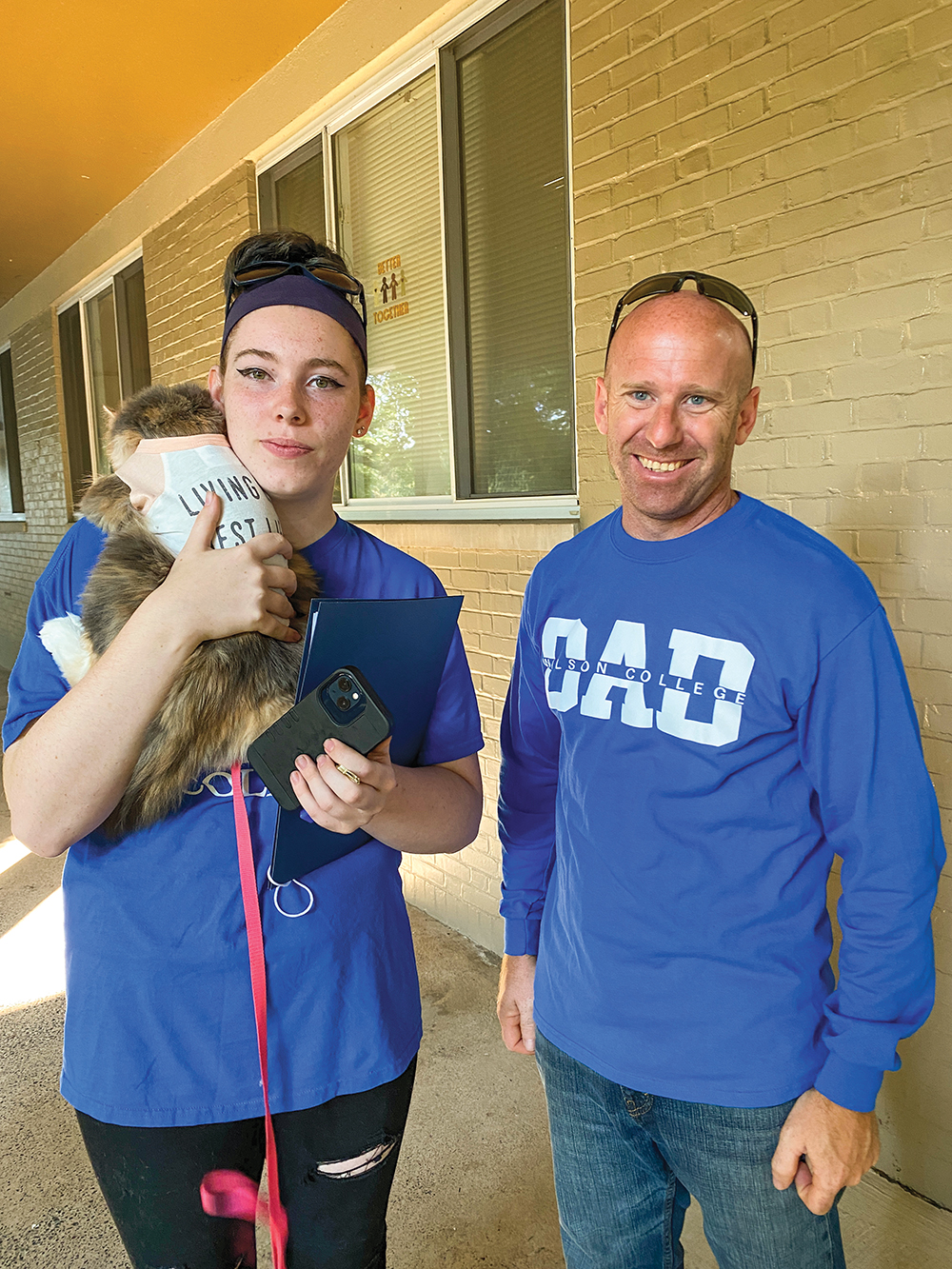 First Day of Classes
With the disruptions caused by the pandemic mostly behind us, the campus thrummed with excitement on the first day of classes this fall. Students proudly announce their years and goals. 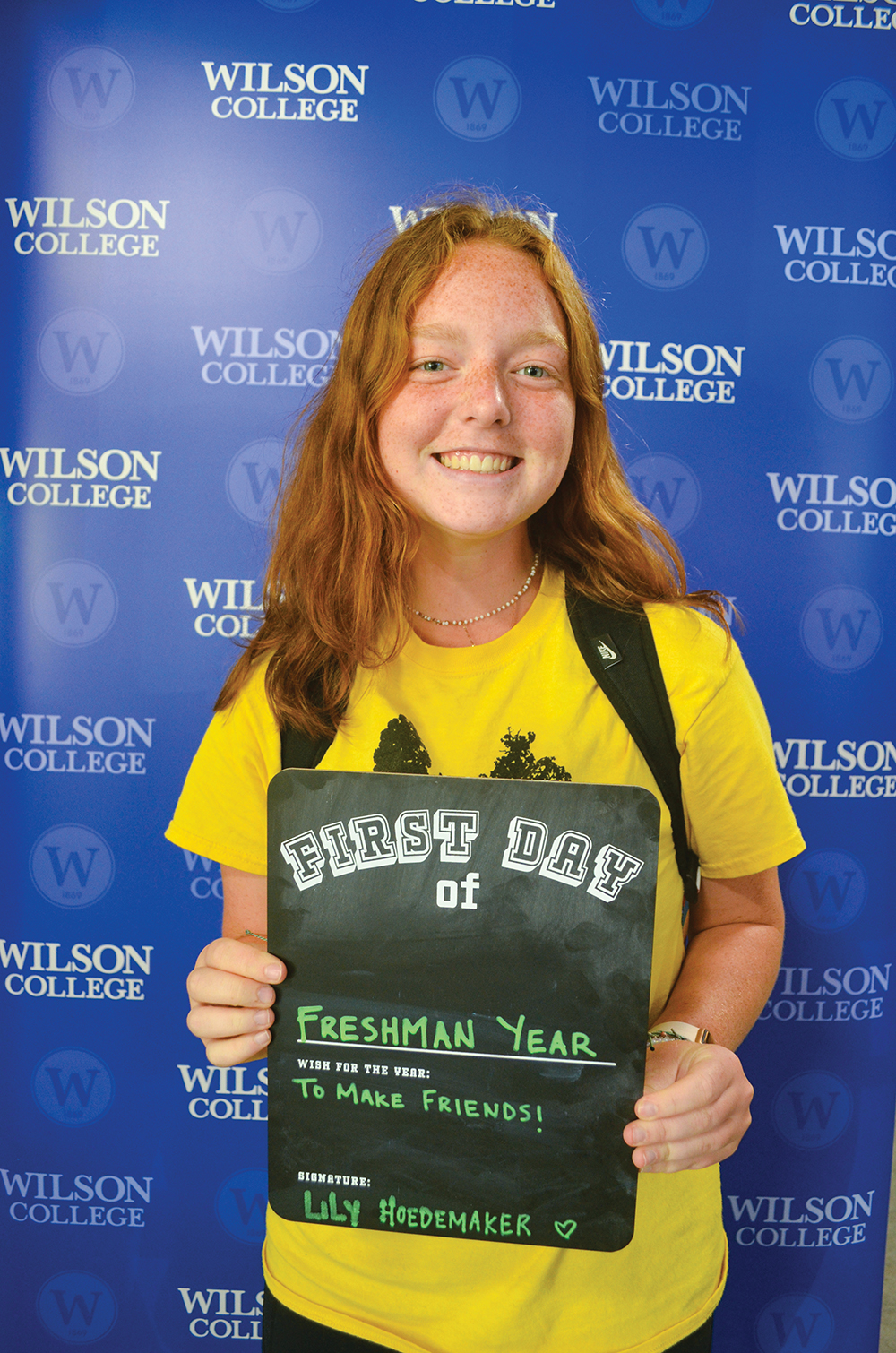 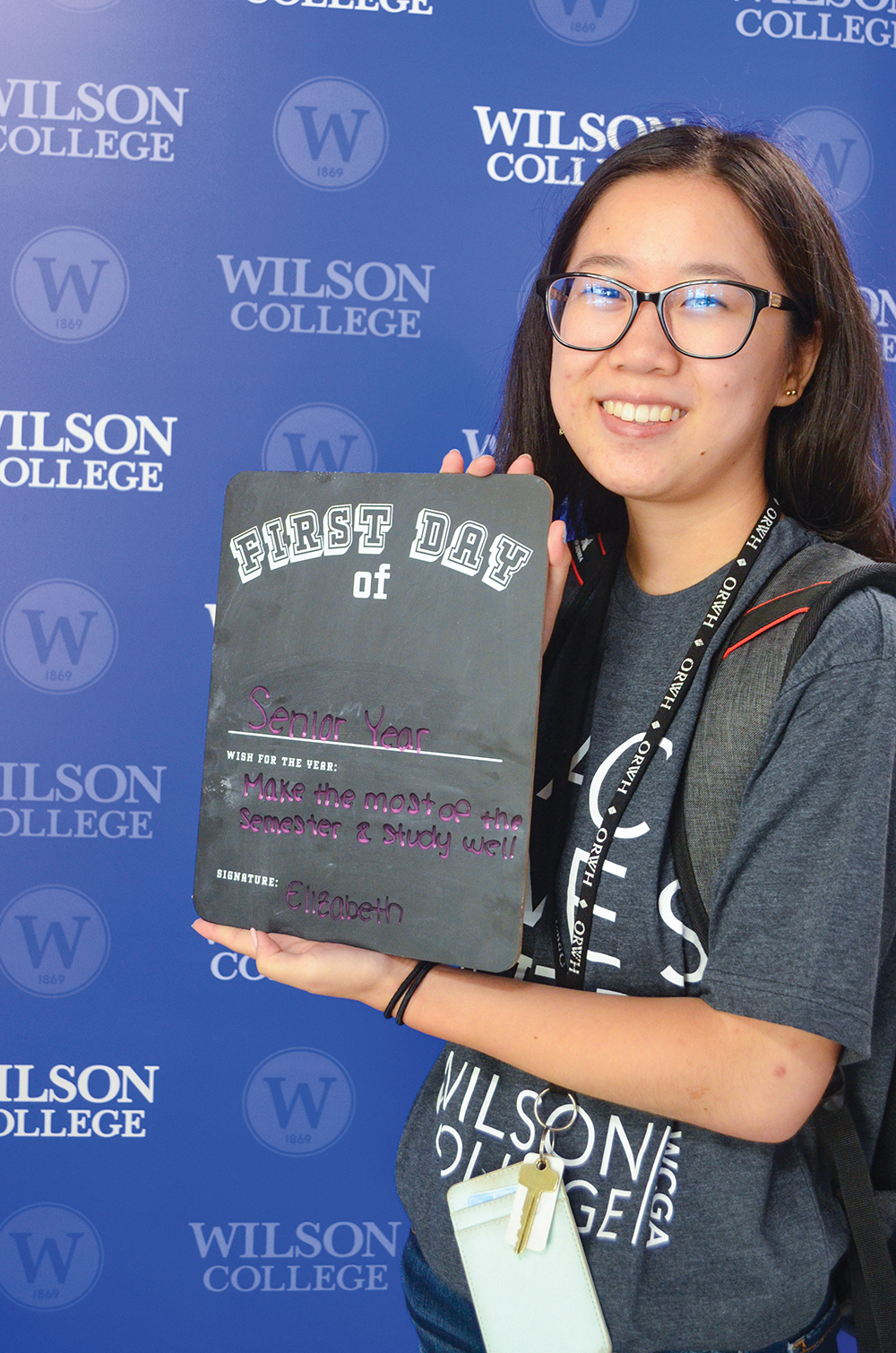 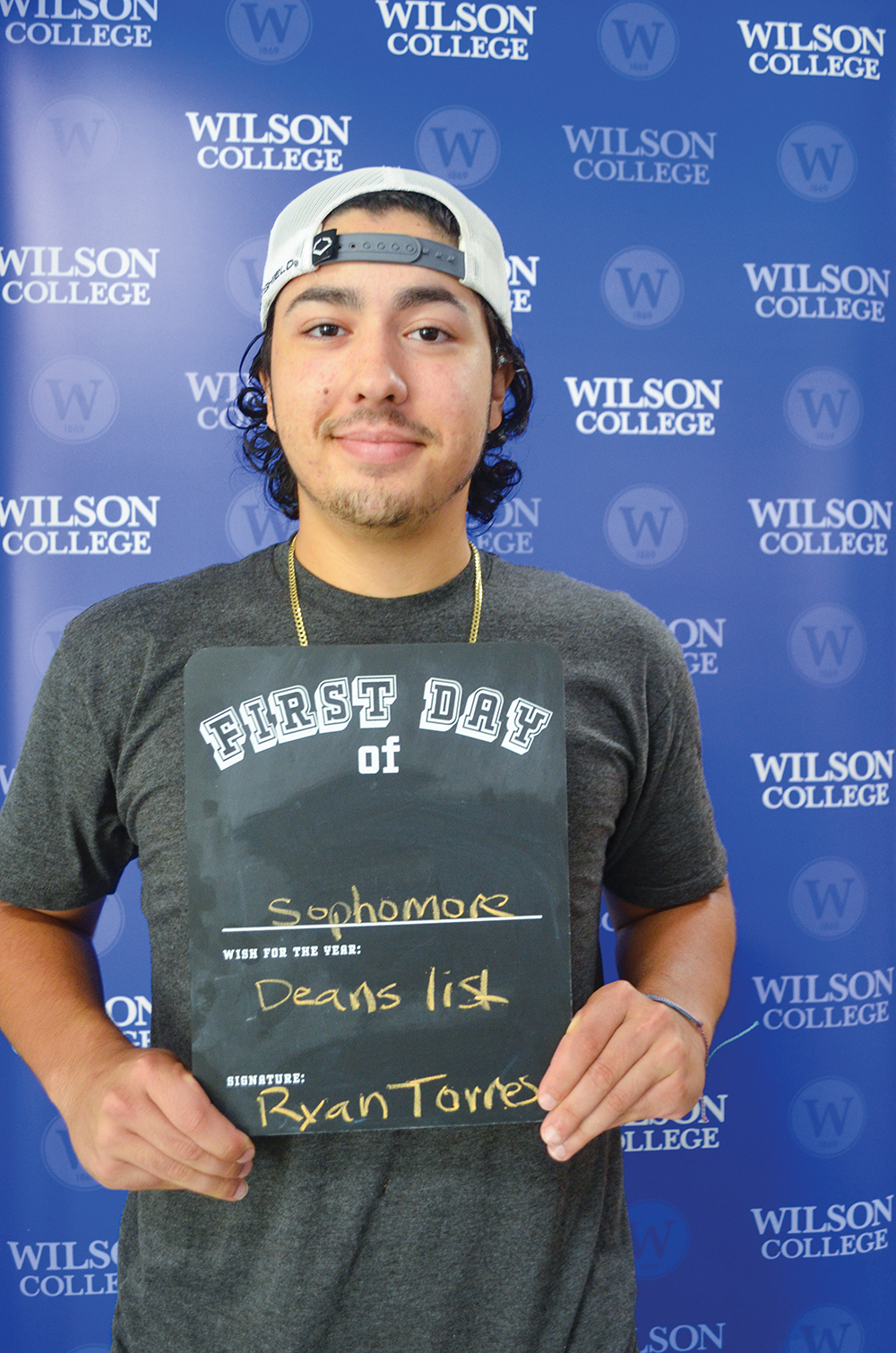 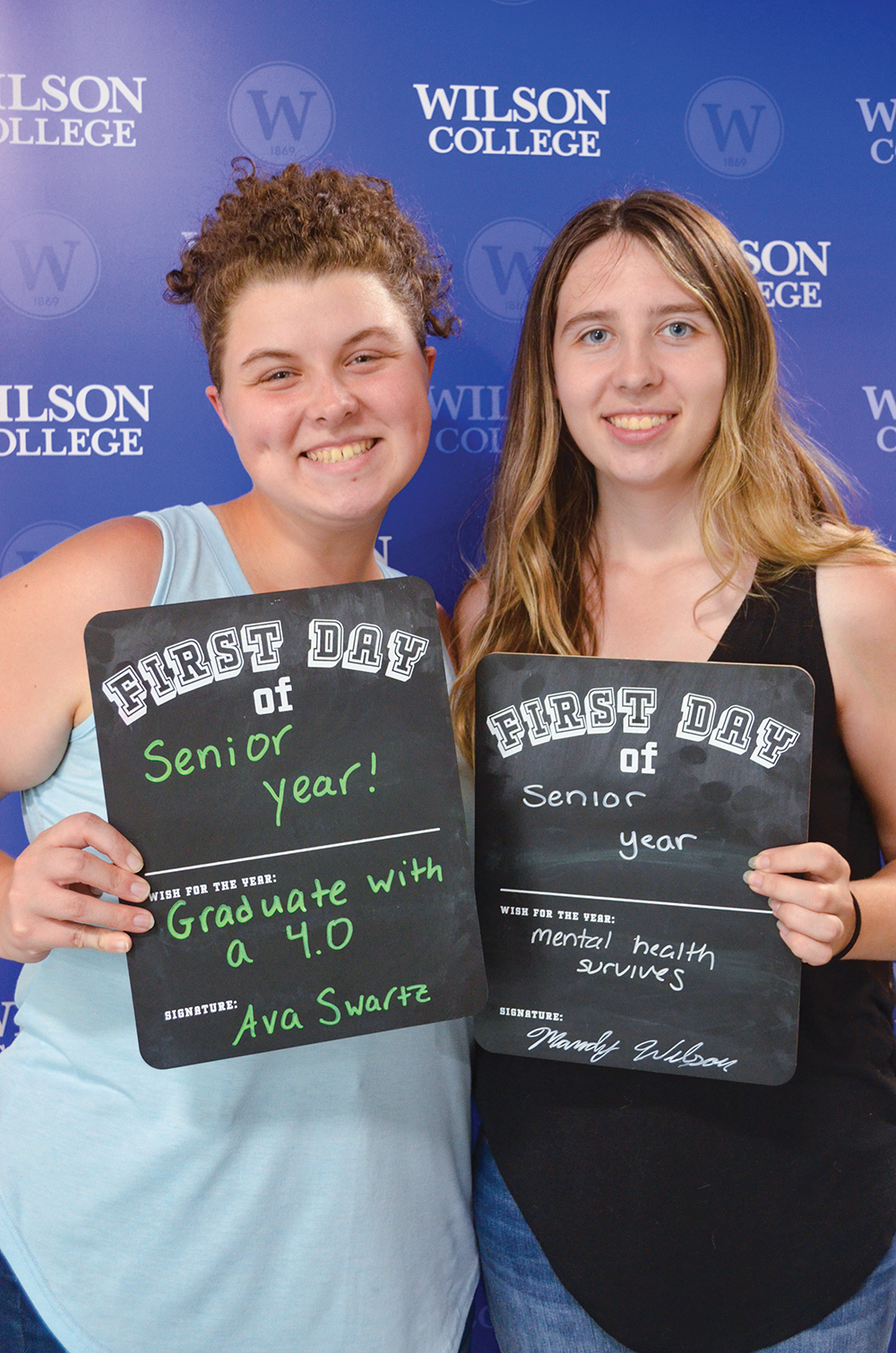 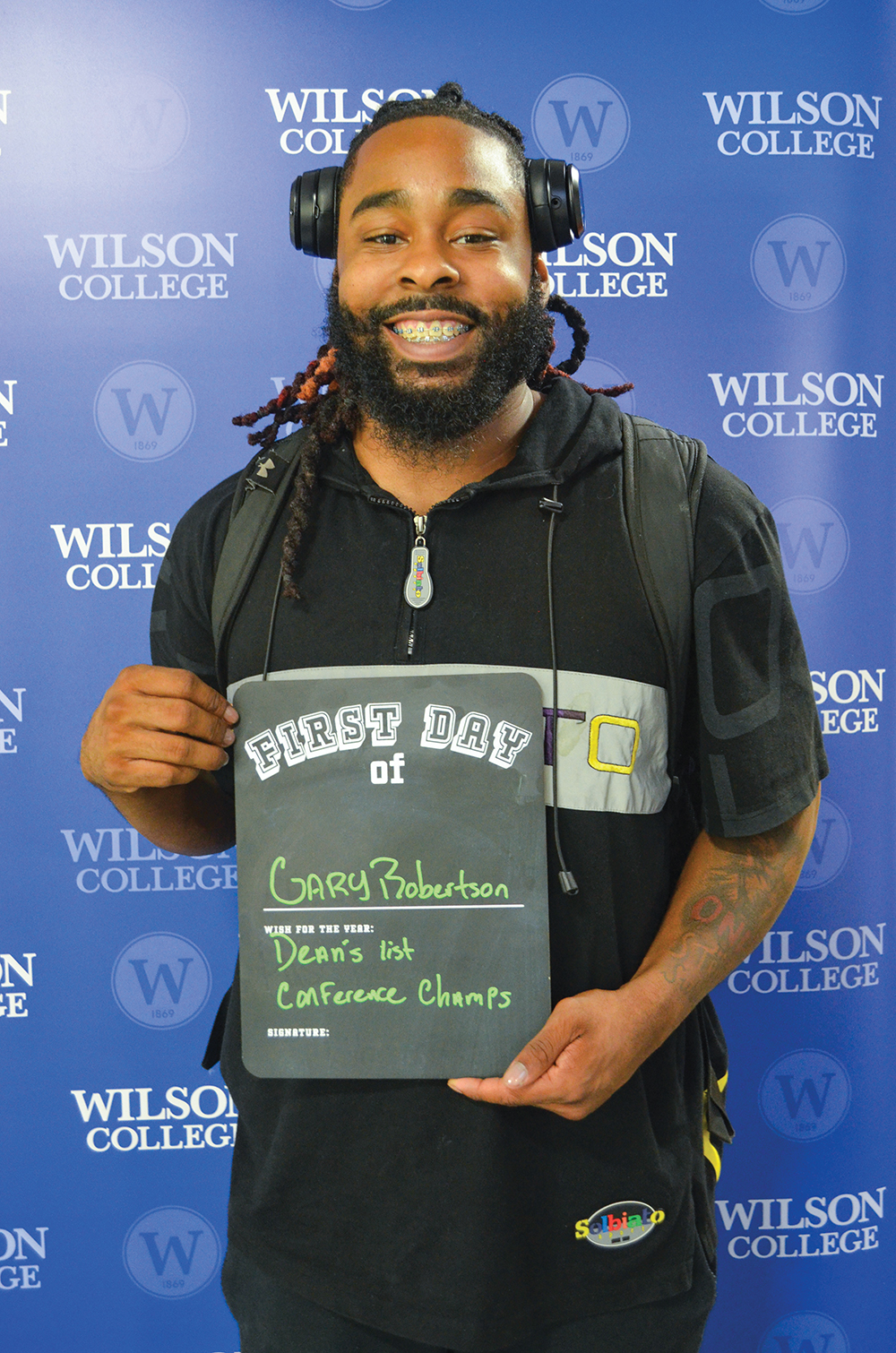 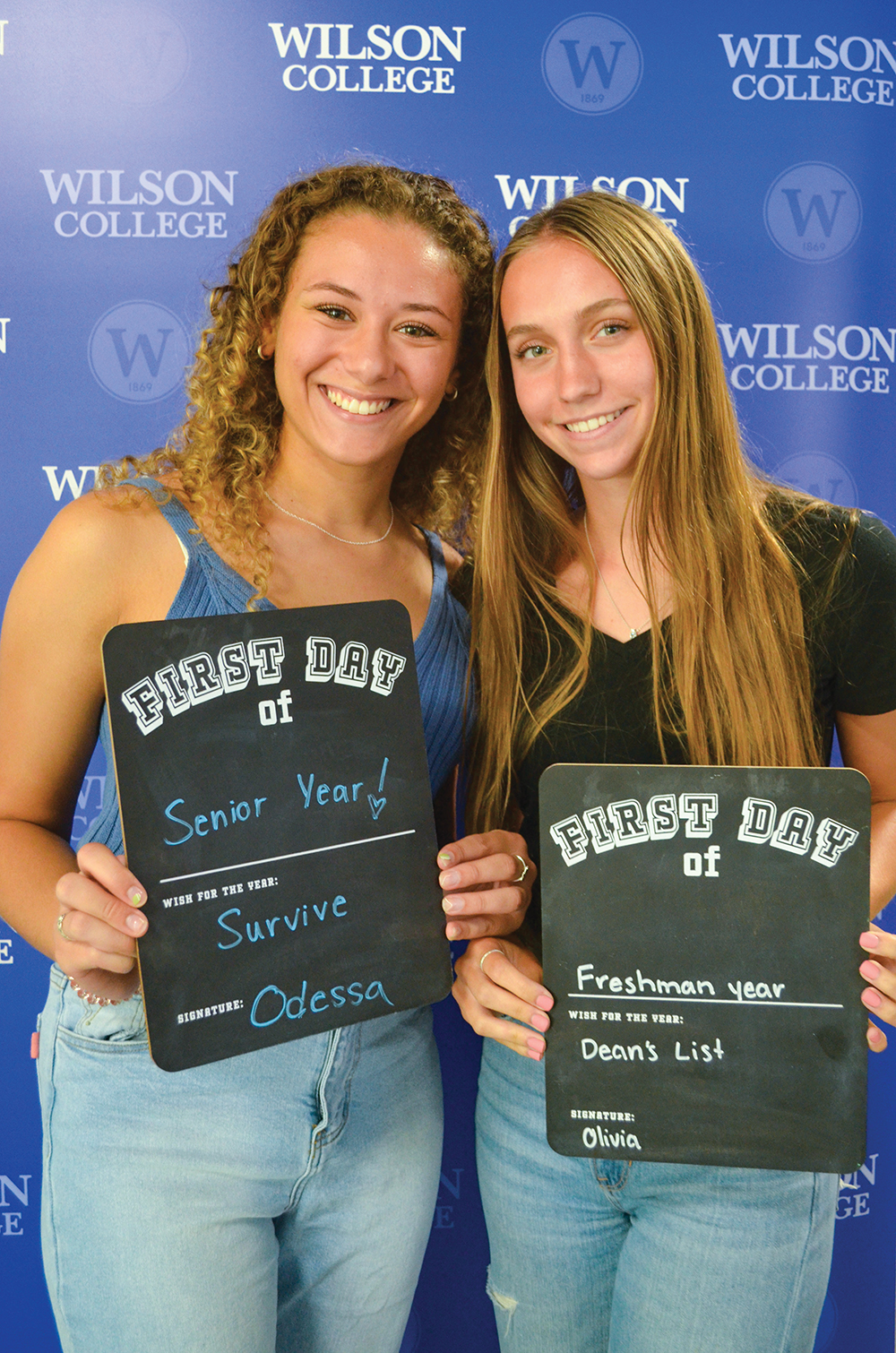 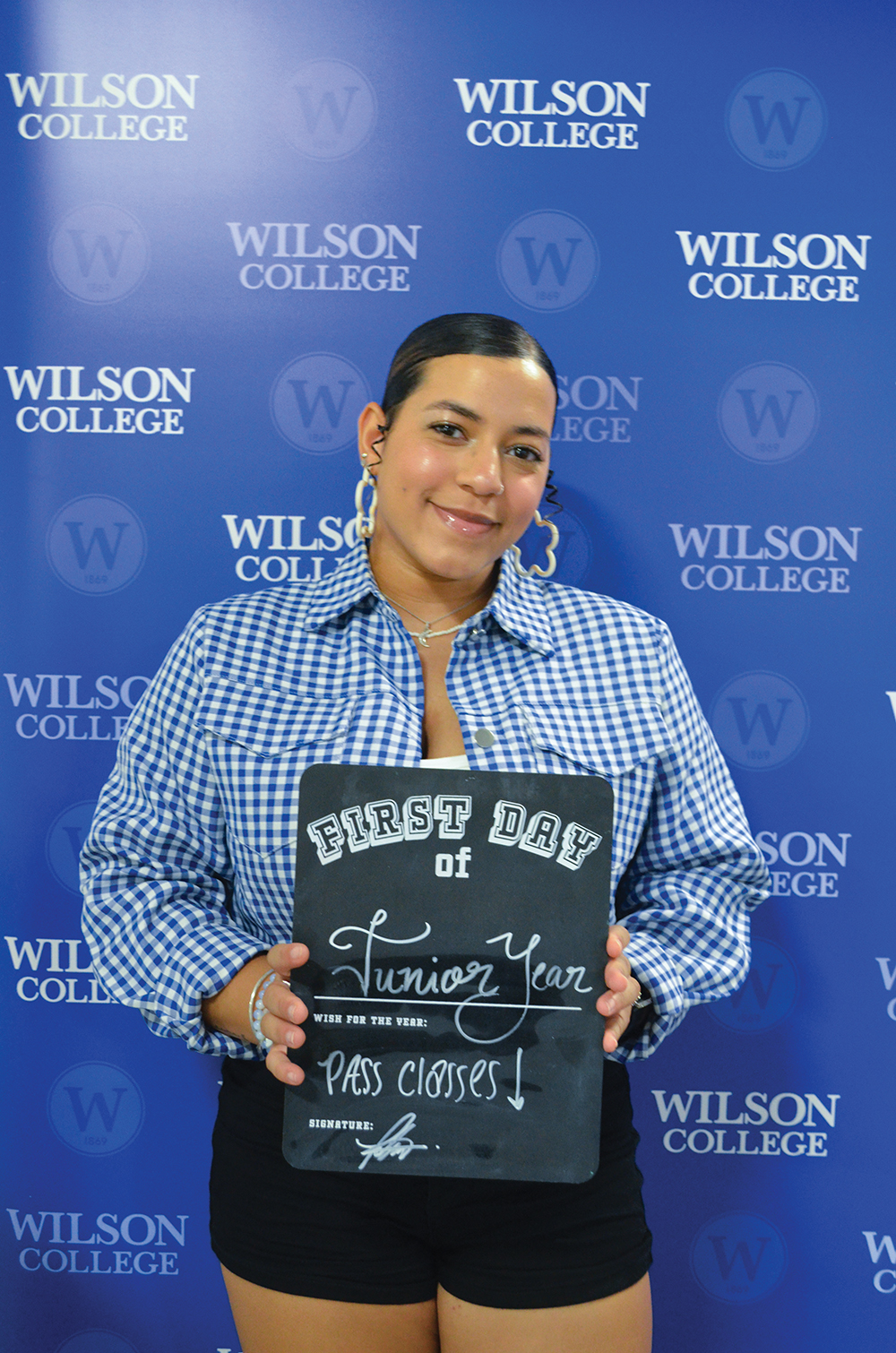 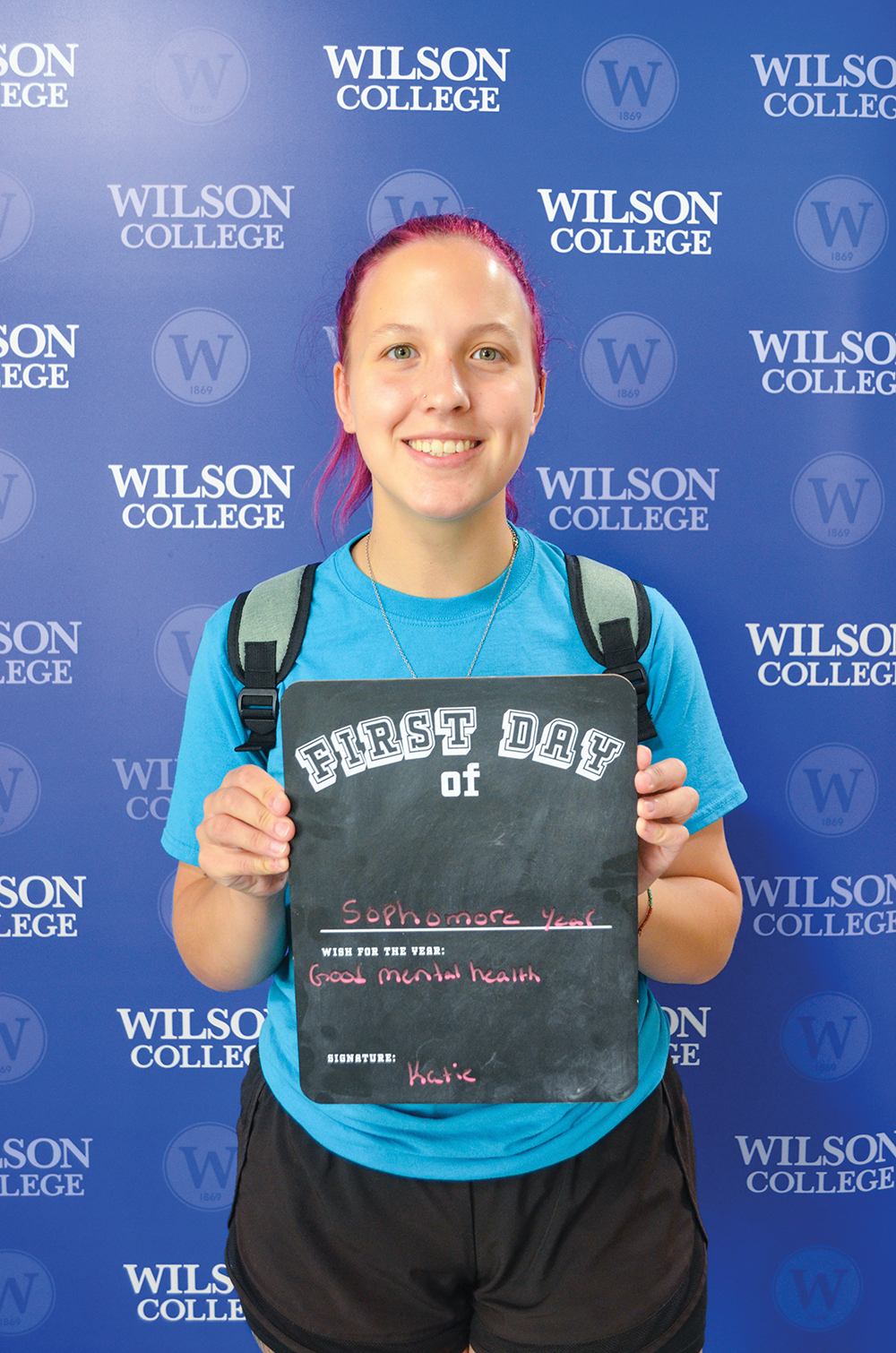 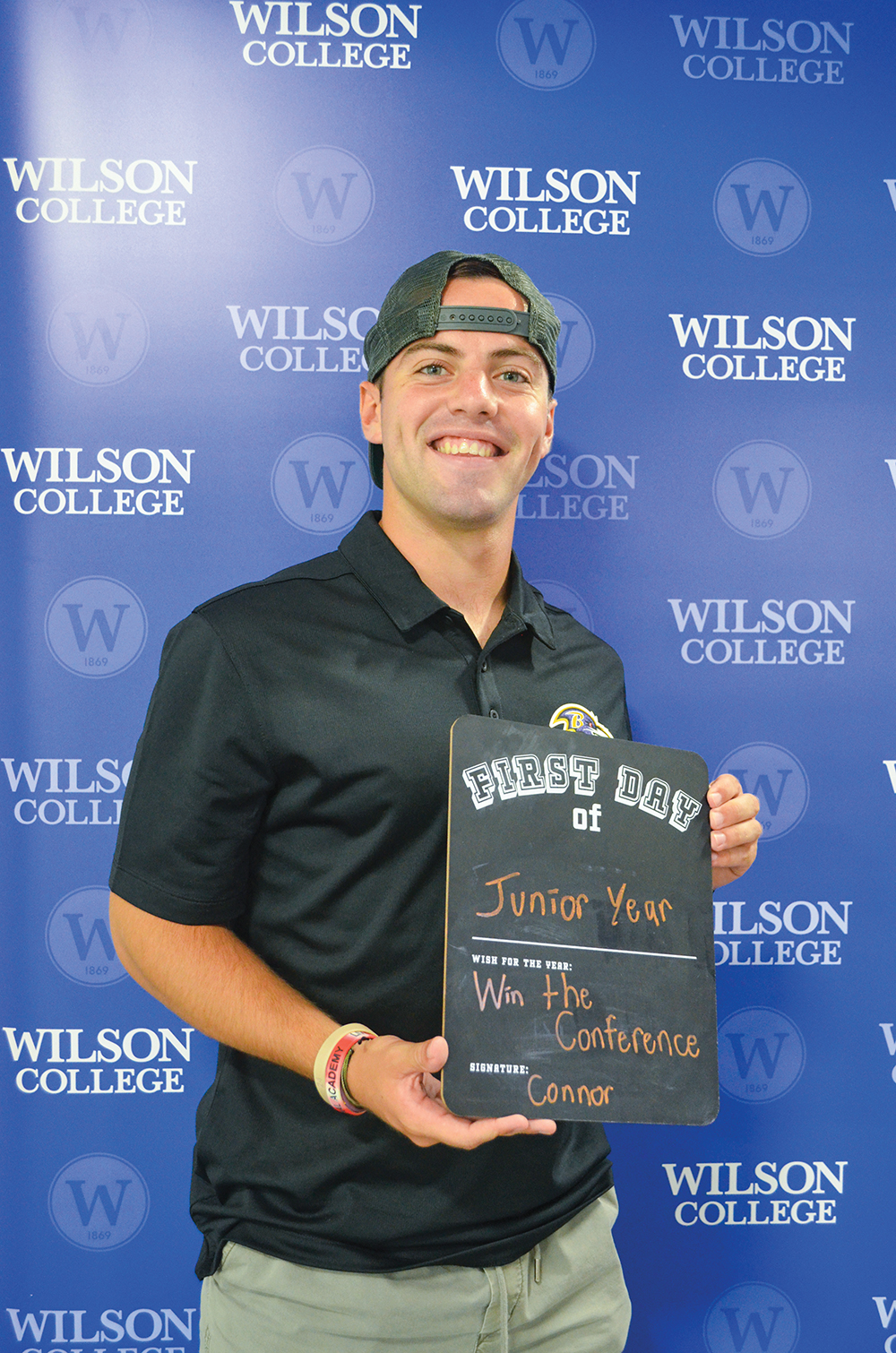 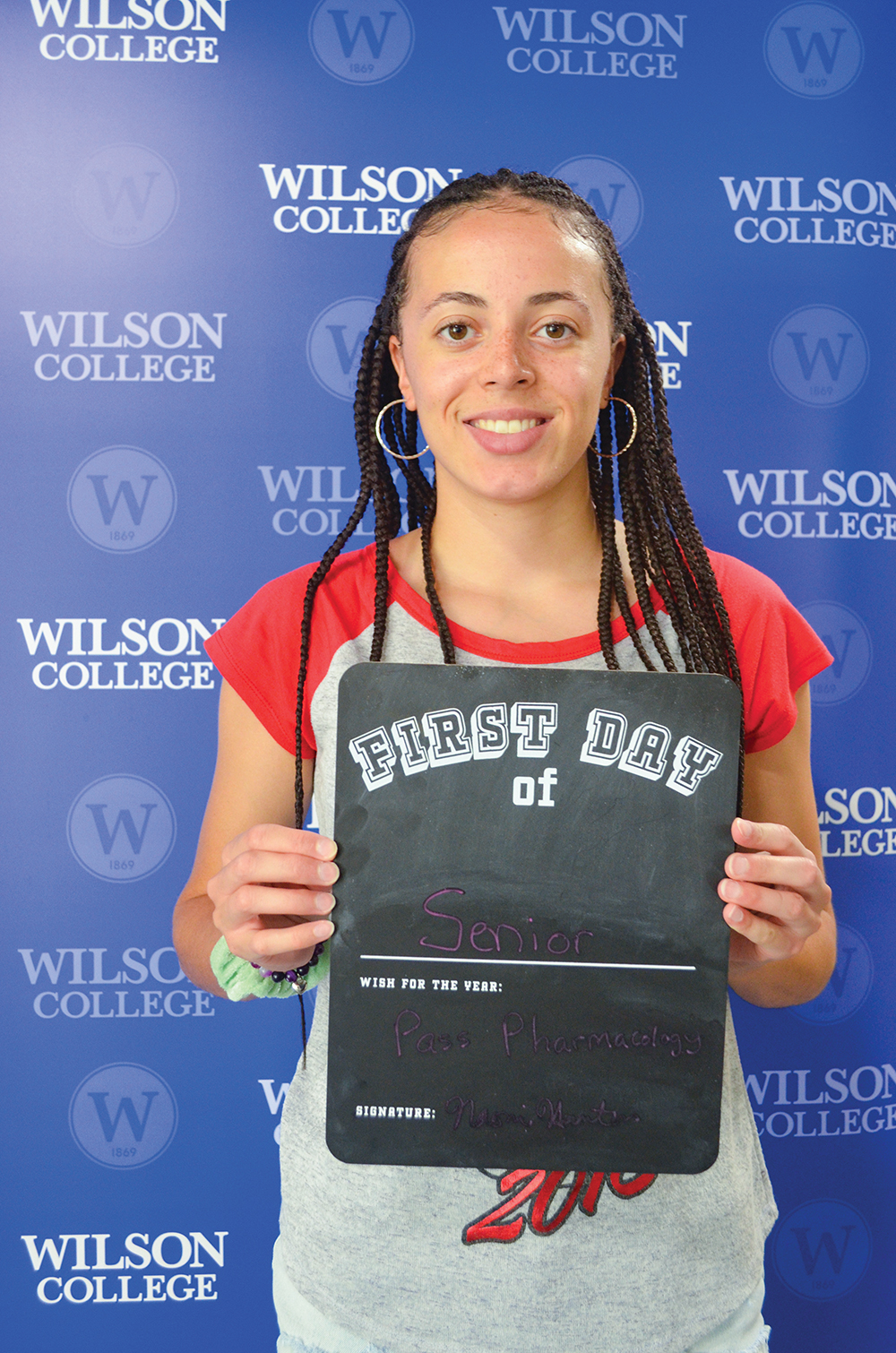 ISSUE: Fall/Winter 2022 CATEGORY: Around the Green TAGS: students
RELATED: Chickens and Moving Pictures Giving the Gift of Curiosity Where in the World Was Wes?

An Alumna gives back in kind

Joan Thuebel ’52 grew up and still lives in Chatham, N.J., but she has traveled the world in body, spirit, and mind. Specifically, she combined a love of exploring countries and cultures with her interest in science. Over the last four decades, she has helped research apes in Gibraltar, elephants in Kenya, butterflies in Japan, platypuses in Australia, medicinal plants in India, and more. These days she doesn’t travel far from home physically but does vicariously through reading and, of course, talking with the Wilson student and faculty researchers she sponsors to go on the same Earthwatch expeditions Thuebel enjoyed for decades.

When she was in high school and thinking about college, a classmate suggested she contact her sister, Lois, who attended Wilson. Thuebel did just that, and Lois invited her to stay in her dorm room while her roommate was away.

Thuebel says that her mother did “a very smart thing” — she baked a whole container of Toll House cookies to bring. Thanks to this gift, Thuebel was “a very interesting person” to the other students. “I stayed with Lois for the weekend and was really impressed with all her classmates and friends. They all accepted me and were as nice as could be. So I never applied to any other place.”

Wilson was a transformative experience. She entered the College as a shy high schooler and graduated a confident woman. “After I left Wilson, I wasn’t shy anymore. Part was maturing, but part was Prof. Rodgers.” She took a class with Rodgers and wanted to drop it because she would have to give a presentation in front of the whole class. Her advisor persuaded her to try, and she did. “That experience helped me more than anything I can think of because later on, when I went into business, I had a job where I had to get up in front of 40 to 50 managers and talk to them about projects I was in charge of. I would never have been able to do that if I hadn’t had Prof. Rodgers’ class.”

Thuebel went straight from Wilson to AT&T, where she would spend the rest of her career. She was hired to do “a job I knew nothing about — psychological testing and measuring for employment.” Luckily, Wilson had prepared her to be a lifelong learner. She took courses at Rutgers University to learn about psychological testing, then earned an M.B.A. at Pace University. Both were paid for by AT&T, the latter a pilot program to educate managers. Later, Thuebel would be responsible for managing the M.B.A. program (no longer a pilot) AT&T offered its employees.

Thuebel succeeded when women managers were the exception and few and far between. A highlight was her appointment to oversee affirmative action and equal opportunities at the company after AT&T was charged with discrimination in 1969. She visited and assessed AT&T entities in several states to determine what was wrong with their hiring practices and how to fix them. “It was the hardest job I ever had because you were not exactly welcomed with open arms, as you can imagine. On the other hand, it was the most fulfilling job because I was committed to the whole idea of affirmative action and equal employment.”

After taking early retirement, she worked as a consultant until she “really” retired. However, just before she left AT&T, she had already embarked on what would become her next passion — scientific expeditions worldwide. It began by chance. She was visiting a friend and leafing through her friend’s Earthwatch catalog — the organization “connects people with scientists worldwide to conduct environmental research and empowers them with the knowledge they need to conserve the planet.” Thuebel was intrigued and persuaded her friend to go on an Earthwatch expedition to research raccoons in North Carolina. However, the raccoon research had concluded by the time they had accumulated enough vacation days. What to do? “There was an expedition in Jan. 1980 on the apes of Gibraltar. I said, ‘What do you think?’ She said, ‘I think yes.’ And that started it.”

“It was a case of curiosity. I was always curious about science stuff. I just started doing it, and it’s really been fascinating. I’ve worked on 27 expeditions over the years.” Thuebel continues to let her curiosity guide her. She reads articles and looks forward to the “New York Times Science Times” weekly. Whenever a topic captures her attention, she reads more, finds related books or articles, and pursues her curiosity. The concept of pursuing knowledge informs her philanthropy. “That is my whole idea: The more people we can get to be interested in the world around us, the better the world is.”

Thuebel now sponsors up to three recipients to go on Earthwatch expeditions annually. She has also generously given to the Global Studies program to fund travel abroad. “I give to Wilson because of what Wilson did for me. I had an incredible four years, and they affected my life after Wilson so tremendously. So I can’t think of anything better to do than say thank you.”

The three latest recipients of Thuebel’s Earthwatch Prize will tell their stories in the next issue.

ISSUE: Fall/Winter 2022 CATEGORY: Around the Green, Uncategorized TAGS: alums
RELATED: Chickens and Moving Pictures Firsts Where in the World Was Wes?