The reigning monarch of Sharpe House introduces herself.
by Cody Ward

Why hello there. I do hope you had a lovely summer, full of rodents, catnip, and long afternoons lounging in the sun.

Oh, where are my manners? To those who I have not yet had the pleasure of rubbing up against, I am Miss Scarlet. Or to those who would prefer to address me by my full title, Miss Scarlet, the Pretty Kitty Princess. For the past eight months, I have been the resident feline of Sharpe House—oddly referred to as the “president’s residence” by some with duller claws and wits.

Let me tell you, you do things quite differently here in Pennsylvania. But I’m getting ahead of myself. I am an original Georgia peach and a true southern lady. I must admit, when my dads told me that we were moving to Chambersburg, I had my reservations. What kind of cat food would they serve there? Who would clean my litter box? Are there even other cats that far north?

My first week as a Phoenix feline was quite eventful. Upon arriving in town, I was welcomed by a group of women from the Wilson College Alumnae Association bearing a small toy (they knew my favorite flavor, catnip!). Now, these are ladies who understand the true meaning of hospitality, certainly my kind of individuals.

Of course, they say there is more pleasure in giving than in receiving. That very same night, I attempted some giving of my own by catching a flying mouse (I believe you call it a bat) and bringing it to my dads in bed. You should have heard their shrieks of joy! 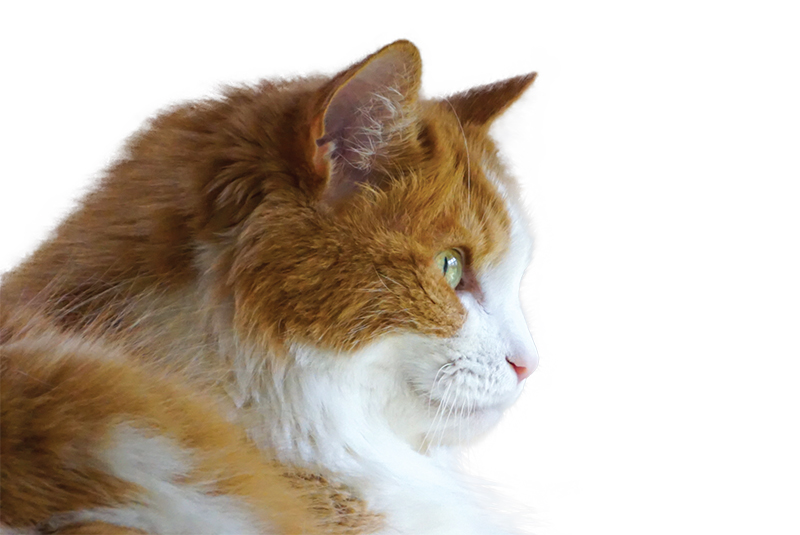 Later that week, I decided to explore my new abode. I crawled into a hole under the sink (what’s that they say about curiosity and cats?), and before I knew it, I was trapped inside the walls of Sharpe House. Everybody was calling my name, as happens when a princess is unaccounted for, but I couldn’t find my way out! A nice group of gentlemen from the facilities staff had to rescue me by pulling me out of the ceiling. It was quite the scene, how utterly embarrassing. Let’s move on.

The past two months have been rather unusual here in Sharpe House. My dads never seem to leave! One of them spends all day in the office, talking to his Wilson friends on a screen. Whenever I decide to make an appearance, they all cheer, as they rightfully should!

Besides that, my days are mostly spent sleeping in the living room, sleeping in the kitchen, and visiting with our downstairs neighbors, Edgar, Gertrude, and Agatha. Oh, you haven’t met the family of groundhogs that live below Sharpe House? You simply must!

I have to admit though, I could really use some alone time. Between you and me, I really think my dads need to get out more. Please hurry back to campus next year, and get them out of the house! But if you’re near Sharpe House, do stop in. We can sit in the window and admire the lovely birds, I can show you my favorite green ball, or we can share a nice glass of tea. I take mine with extra catnip.