When Nicole Downey ’20 signed up to help research dholes−also known as Asiatic wild dogs or whistling dogs−in the central mountains of Thailand, she knew it was going to be hard work.

For two weeks in January, Downey and her fellow researchers hiked through the mountains and jungles of Khao Yai National Park from dawn to dusk in search of the elusive dogs. At night they took shifts monitoring the traps they had set to capture dholes safely. The goal was to fit adult dogs with radio collars to learn more about their behavior, range and the location of their dens.

On their daily hikes, Downey and her teammates made sure their live traps were functioning, set up or moved camera traps, tracked paw prints and collected scat samples. In the field, they had to watch out for the pythons, cobras, scorpions, sun bears, Asiatic black bears and elephants among the many animals and birds that also call the park home “Elephants are quite good at sneaking up on you in the woods,” Downey explained. “They’re very quiet and can be territorial. We had to be aware of them in case they charged us.”

Downey encountered a lot of wildlife— on her first day an elephant wandered through their camp, sambar deer were regular visitors and porcupines lived in the trees above her cabin. However, she did not see a single dhole. While this was disappointing, the dogs’ elusive- ness and the lack of data about them underscored the importance of this re- search. Not only will it contribute to the scientific knowledge of a poorly under- stood species, but the dogs of the park face an immediate threat. The research team, led by Ranglarp Sukmasuang, Kasetsart University associate professor, is in a race against time to save them.

The park is a popular tourist attraction famed for its sambar—a large deer close in size to elk. A ranger told Downey he used to see hundreds of sambar on his patrols, but these days he is lucky to see 10 or 20. This crash in the sambar population is a problem for dholes. As the apex predator in the area (no tigers have been spotted there since 2005), some locals believe the dogs have decimated the sambar. If that were true, the park authorities would cull the dogs. With fewer than 3,000 dholes left in the wild, this could be catastrophic for the survival of the species.

Fortunately, the park authorities will let the scientific evidence determine what action they take to restore and preserve the diversity of the park. To date, the research shows that the dhole’s population in the park, like the deer’s, has crashed—pointing to a common cause for the declines. The current hypothesis is that because the wet seasons have been shorter and drier in recent years, the resulting lack of watering holes during the dry season has forced the deer and dogs out of the park and into conflict with humans. 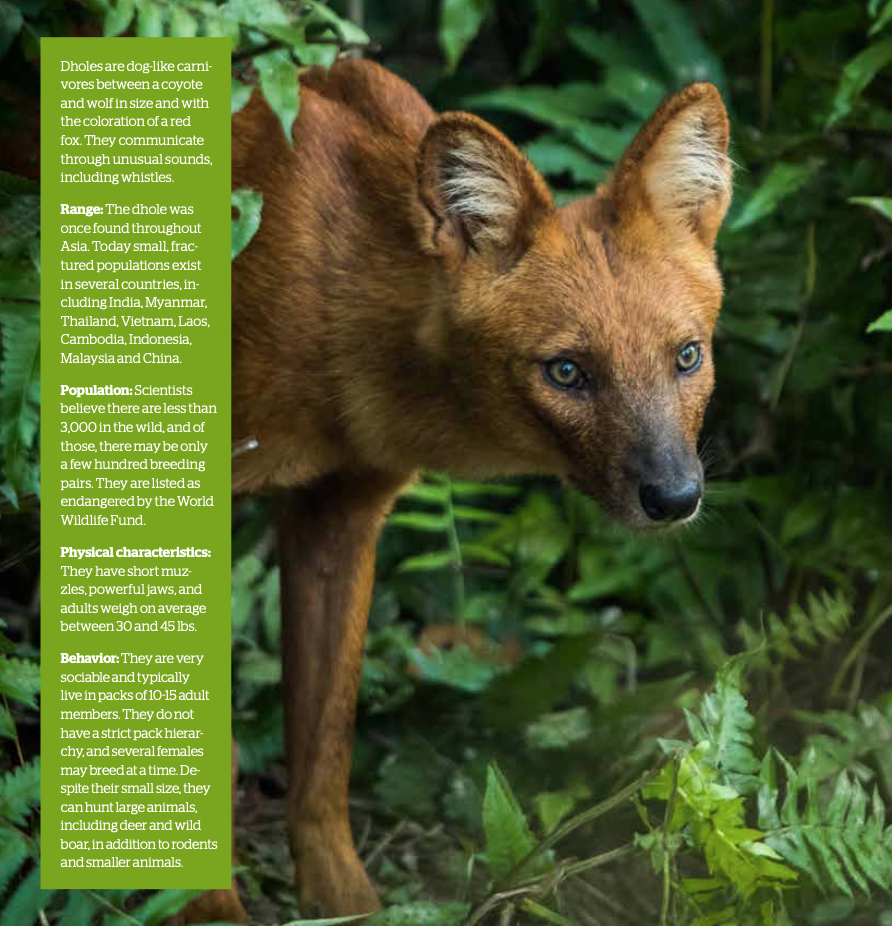 Although no dogs were trapped while Downey was there, her team photo- graphed paw prints to determine pack sizes and collected scat, a lot of scat. Downey joked that her group collected more scat than any previous group. “We were touching a lot of poop, not glamorous work, but it was valuable.” Analysis of the DNA in the scat shows the dholes eat civet, sambar and boar as well as smaller animals. In other words, they eat a mixed diet and do not rely on sambar. “Our work has real-world impact. It’s going to save these dogs if we prove they are not the reason the sambar are dying.”

This experience has taught her the importance of education to conservation efforts. In the short term, she has contributed to saving the dholes within the park by educating the local people and park authorities about the true relationship between apex predators and the health of their ecosystem. In the longer term, she hopes educating people about ecosystems may save them from destruction. “My career goal is to be in conservation education,” she said. “We need more people to believe in conservation and that it’s not all doom and gloom. It’s something that is attainable if we all work at it.”

Downey’s trip to Thailand was funded through Wilson’s Joan M. Thuebel ’52 Earthwatch Prize. The prize sponsors a student or faculty member in alternate years to participate in an Earthwatch Institute research project. Downey chose the dhole project because she had never heard of the animals. This reaffirmed her conviction that education is key to saving the planet. If these apex predators within their ecosystem are relatively unknown— how many other species and ecosystems may be in danger simply because the public hasn’t heard of them?

Downey learned that working in the field is hard but rewarding, but her calling remains in education. “I hope to teach people that little things that all of us can do, like recycling or getting more efficient cars or lightbulbs, are important. We’ve seen things are dying and we are heading into the sixth major extinction event. Science doesn’t lie.”

However, she believes there is time for us to turn back from the precipice. If a small band of researchers in the park can save the remaining dholes, she is sure that through educating and inspiring others to participate in conservation efforts we can save the planet for future generations of people and animals.