Dancing Duets in the Digital Domain

Megan Mizanty, assistant professor of dance at Wilson College, had been successfully collaborating on modern dance performances with a group of three fellow dancers/choreographers. Then in 2013, one of the dancers moved to England to complete her doctoral studies. The group was faced with a dilemma—how to continue collaborating now that they were 3,000 miles apart. 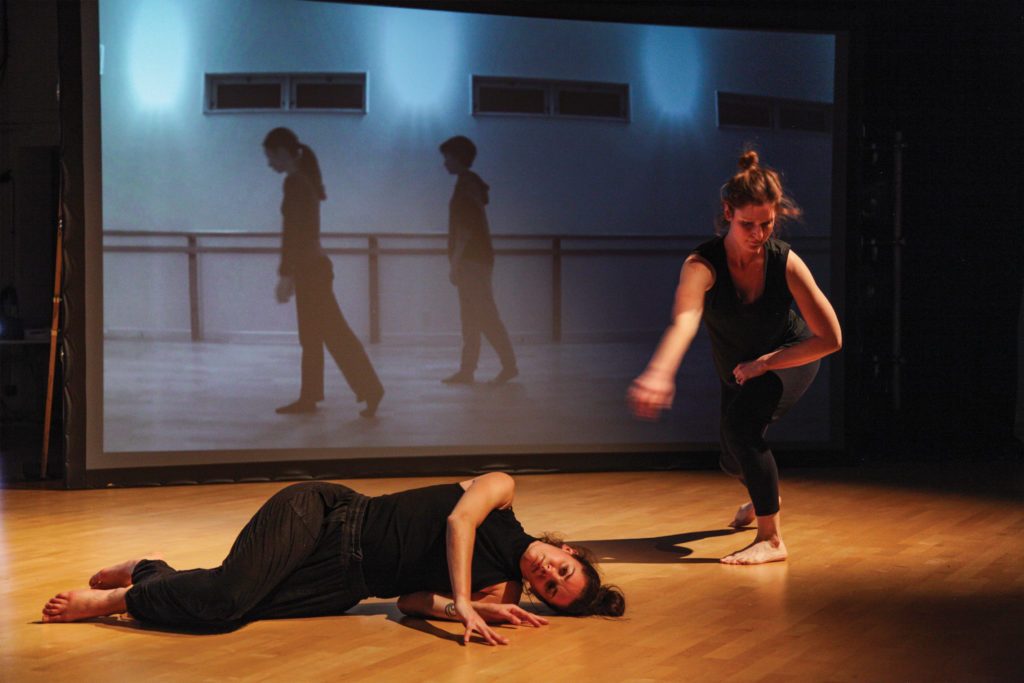 Rather than seeing their geographic separation as an impediment, Mizanty and her collaborators Becca Weber in England, Lora Allen in Philadelphia and Andrea Lanzetti in New York used it as inspiration. They formed Project Trans(m)it to explore “dancing” with other dancers across the globe through technology and over digital media. Project Trans(m)it ultimately wants to determine if dancers thousands of miles from each other can collaborate on performances. They are also interested in discovering what might be gained or lost when movement is learned over technology. Mizanty says that if dance can be successfully “transmitted” digitally, “it gives you the world.”

The group proposed to create a duet, recruit pairs of dancers from different countries and see if they could “transmit” their original duet to the pairs without meeting in person. Allen choreographed a duet between Mizanty and Lanzetti. After the pair learned the routine, they recorded the choreography from multiple angles, edited the video and packaged it into a digital toolkit that was shared with eight dancers—four duet pairs—from four countries: Japan, Switzerland, Madagascar and the United States. The dancers then had two months to learn the duet, record it and send the video file back to Project Trans(m)it. 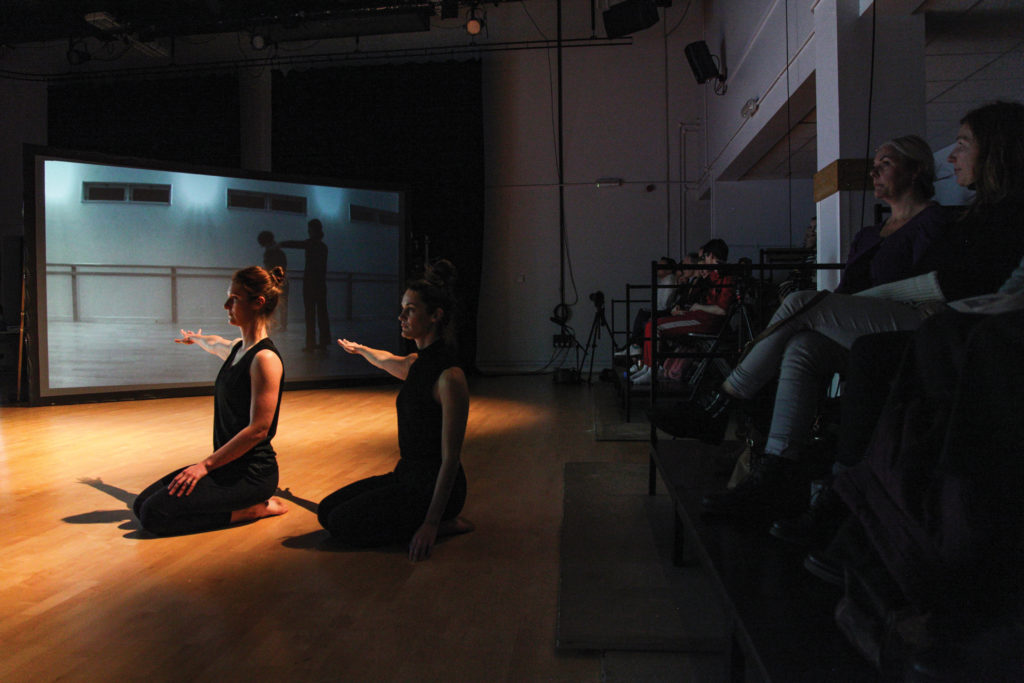 After receiving all of the video files, Mizanty, Allen and Lanzetti watched the performances closely, studying the slight variations in the movements from duet to duet, noting how things like a dancer’s build or a faster step provided a different reading of each movement. “I found myself memorizing the films of the dancers, noting the subtle differences between all of our international collaborators,” Mizanty recalled. “It’s a different way of knowing people and deeply listening to them physically.”

As Project Trans(m)it’s artists have discovered, technology provides a new lens for experiencing and studying movement. When they video-chatted with each other from their separate locations, they became conscious of the benefits and limitations of the digital connections. They could share ideas and perform new movements in real time, but screens could freeze when one dancer was demonstrating a move, audio could drop in the middle of a discussion, connections could be lost or delayed. 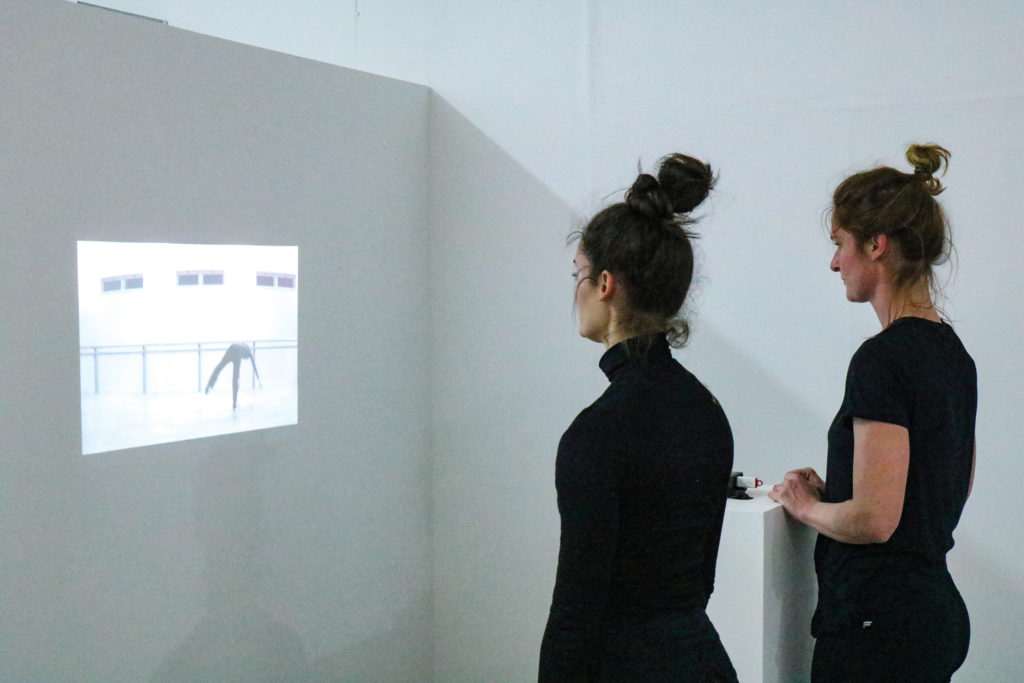 “We added a ‘dropping out’ section to the dance, mimicking the feelings of us freezing or losing connection in an online rehearsal,” Mizanty said. “In that sense, technology led us to new territories in the dance we wouldn’t have discovered otherwise.” By including the digital hiccups and incorporating them into the live dance, the dancers have blurred the lines between the real and virtual spaces, creating a third space where one becomes part of another.

In November 2018, Project Trans(m)it presented and performed the finished work at the Wimbledon College of Arts in London. The performance included videos of the duet performed by dancers in Japan, Switzerland, Madagascar and the U.S. projected onto screens and shown on monitors while Mizanty and Lanzetti performed the duet live in the space. The culminating performance explores the connection and disconnection of digital interaction.

It’s a physical interpretation of the connections between people communicating through technology—one moment the connection is smooth and flowing, both are in sync and responding to and feeding off of each other; then there are awkward moments of disconnection when both start to talk at the same time or both stop talking to let the other speak before their connection returns to a natural back-and-forth of two people communicating in sync with each other. Similarly, in one moment, the dancers are physically connected to one another through touch and movement, and in the next separated from each other and moving in different but seemingly coordinated trajectories before rejoining again. 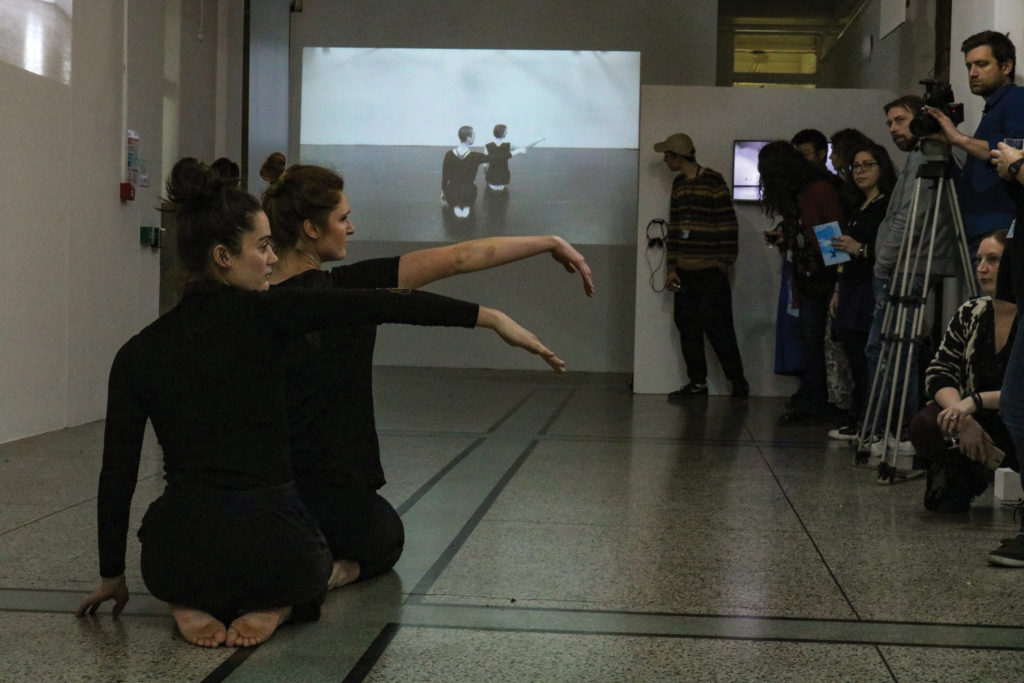 “Project Trans(m)it would argue that [technology] connects us in the most profound ways,” Mizanty said. “Through the use of technology, I’ve been able to dance with a duo from Japan. I haven’t traveled to Japan yet, but I know how two Japanese dancers that I’ve never met move, and move with intention.”

At its core, movement is about connecting on a human level, and Project Trans(m)it’s use of technology can help further that connection globally, according to Mizanty.

For the dance world, she believes, Project Trans(m)it demonstrates that technology can enable a level of global collaboration that was inconceivable to previous generations of practitioners. Choreographers and dancers can now work with artists from around the world, furthering the study of dance and movement.

Project Trans(m)it also has something valuable to teach the non-dance world about human interactions in a global society, Mizanty said. She explained that she felt more “empathy” for the other performers thanks to their digital interactions. “It’s deep listening and the ability to see a lot of different languages and cultures and experiences. It’s taking the time to get to know a stranger. Movement is the universal language. What better way to connect with people.”