We are both Wilson Women—today and forever. We chose Wilson in the 1980s, less than a decade following its near-death experience and during very lean times (as in, alumnae donating lightbulbs for the dorms “lean”). We chose Wilson because she was a women’s college and because of the immediate connections we made when we visited this beautiful, historic campus happily situated ’mid a group of pines and maples. 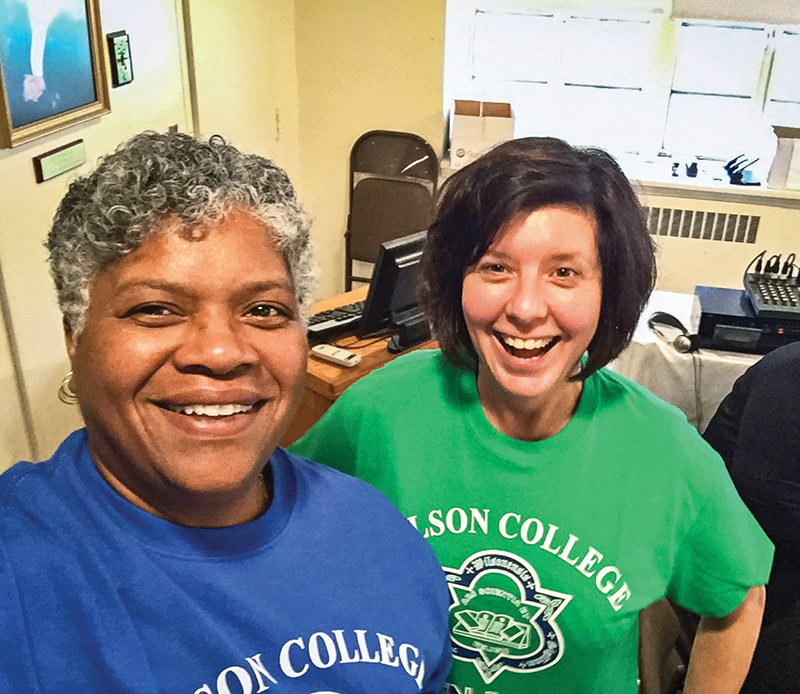 While at Wilson, we studied (Tracy possibly more), we made lifelong friends, we played sports (Jill did–Tracy can’t catch a ball to save her life), we were officers in WCGA (Jill was president), we sang, we danced and we laughed. We received the benefit of a liberal arts education that guided us well after we left this nurturing community we called home for four years.

We both pursued our careers with the passion and promise that comes from attending an institution whose commitment to its students and their journeys is paramount, and whose honor principle is woven into the fabric of the community. Ultimately, both of us began to take on leadership roles in our careers (Jill in the nonprofit world and Tracy in the scientific community). Simultaneously, we also had the opportunity to volunteer for Wilson–first through the Alumnae Association and then the Board of Trustees. We both looked to Wilson alumnae, ever present during our time as students, as role models for our efforts on behalf of the College. As they say, the acorn does not fall far from the tree, and we are still close to so many of those women who sustained Wilson throughout her history.

Serving Wilson as Trustees has been one of the greatest privileges we have ever had, and at times, also a tremendous emotional burden. It taught us about the inherent complexities and challenges facing a “small but mighty” single-sex liberal arts college in a small town in central Pennsylvania.

When the Board of Trustees had to vote on a proposal to respond to some very harsh financial realities facing Wilson, coeducation was on the table and part of a strategic plan. The vote for coeducation was separated from the rest of the proposal. The vote was verbal and went around the table; we were the last two to vote. Both of us voted “no” on that component of the plan with voices as strong as we could make them (we already knew the result by the time the vote came to us). We couldn’t imagine Wilson as anything other than a women’s college.

Following the majority yes vote, the silence in the room was overwhelming–until we both began to cry softly. Yes, we both cried that day. The feelings were so visceral.

Two things stand out from that event. First, it was incredibly apparent that each member of the board thoughtfully voted for what they firmly believed was in the best interest of Wilson and Wilson’s future. Second, every member of the board came up to us to comfort us and tell us they understood and respected our vote and our feelings of loss following this decision.

Soon, swift changes began at Wilson, and that meant that both of us needed to reconcile our feelings of loss with our commitment to Wilson and her community. For Tracy, that moment came when she met with several longtime faculty members who had begun teaching on campus when she was a student. They indicated some sadness, but said that they were absolutely committed to making this expanded mission for Wilson work. Tracy realized she needed to support them, the people who eat and breathe Wilson every day–whose commitment to our students is the reason Wilson continues to thrive.

For Jill, the moment came through conversations with Tracy and working through comments and conversations she had with friends, family, alumnae and other Trustees. Two comments in particular stayed with her and clarified her thinking. First, when she shared that she was struggling with the coeducation portion of the plan, one person stated, “Then perhaps you should consider resigning from the board.” Second, a friend who attended a college that had closed more than 20 years before described how odd and sad it was to not have an alma mater. Jill realized her love for Wilson transcended her internal struggle and she was not about to resign from the board. The thought of no longer having a place to call “alma mater”–or for other students to have the same amazing, transformational experiences that she experienced–reaffirmed her commitment to Wilson.

We both pledged to support a rapidly evolving Wilson and expanding college community. At times, it wasn’t easy. We knew that some friends and alumnae leaders were angry, disappointed, and deeply saddened by this decision. And we understood that. But we hoped time might heal all wounds, as they say.

Invariably, time did pass, but Wilson remained Wilson in many ways. Individual student experiences, a liberal arts education and the honor principle were still the fundamental elements of a Wilson education. Our faculty and staff remain as dedicated as ever. And with each passing year, more undergraduate and graduate students attended Wilson. We now have students living in every dormitory on campus–something unimaginable in our time. And we see new vibrancy as students literally populate every corner of campus.

Indeed, we both have a sense of hope and optimism for Wilson’s future. As far too many small, private colleges and even public universities struggle with enrollment and finances, Wilson has experienced enrollment growth and a steadying of finances because of the decisions made just over five years ago.

Is change easy? No. But was it necessary for Wilson? Absolutely. Is Wilson still fulfilling its mission of providing an excellent liberal arts education? Yes. Are students still making lifelong friends when they leave this “small but mighty” campus? Yes.

Wilson was and still is a wonderful, magical and transformational institution. Wilson is the place we called home and we are so thrilled that so many others are calling her the same. We are and will be forevermore Wilson Women, and proud that Wilson is our alma mater. And cheers to all of her alumnae and alumni. Wilson is still your home and alma mater, as well.