My Wilson story began in August of 2006 when, as a child, I lived on campus with my mother — who was a student here. In 2010 I followed in her footsteps and entered the college as a student in my own right. And my Wilson journey continues to this day as the assistant director of admissions recruiting new students for my alma mater. 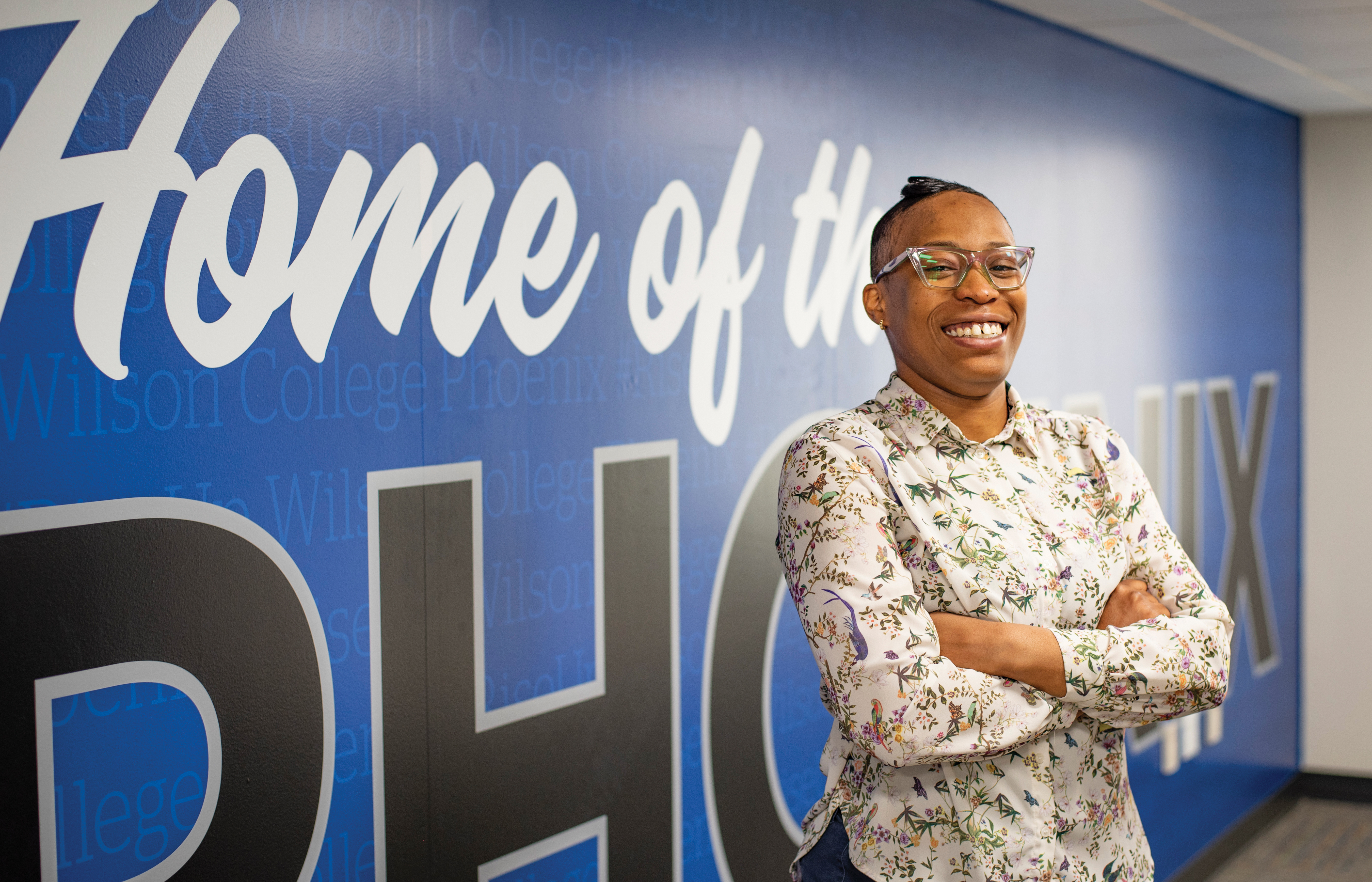 Let me begin with my arrival on campus as a teenager. For most of my life, I’ve had very long dreadlocks. In high school, I was known as the black girl with dreads who plays basketball. This never bothered me because there was nothing false about it; I am a black woman, I did have long dreadlocks, and I used to live-eat-breathe basketball. I spent a lot of time playing at Second Street Park because it had a newly renovated court and was the closest to campus. Countless times people drove by, honking their horns and screaming the n-word at us. The first time it happened, I stopped playing and looked around. My friends hadn’t stopped playing, and I realized, wow, they must be used to this. That’s just a taste of what I’ve experienced in Chambersburg.

In 2010 I entered Wilson as a first-year. I was excited to start college and finally get to play organized basketball again. My college basketball career looks excellent on paper, but it was four years of tears and struggles. We were a small team competing against much bigger and better competition. Because there were so few on the team, I guess I was bound to be heckled by opposing fans. I get that it comes with the territory, but there were many times when opposing announcers would purposefully get my name wrong. They would call me Whoopi Goldberg or Bob Marley because those two seem to have been the only black people with dreads that these white people had heard of. My coach told me to ignore it and play harder, easy for her to say. It was wrong, and I probably should’ve gone to the Athletic Director about it, but I didn’t.

It wasn’t just opposing teams that singled me out. I’ve had teammates turn their backs on me and say I’m nothing but a streetball player. I guess some were jealous that I had become the focus of the team. But would those girls have said that if I were white? I know for a fact that most of them came from areas where there weren’t many African-Americans. In my years at Wilson, I only had two African-American teammates, and they never had any issues with my style of play because they understood it!

What people don’t get is that sports can be played in different styles in different cultures. My basketball culture is gritty, tough, in-your-face, and flashy. People around here are used to the fundamentals, no flair to their game, and trash talk is a big no-no.

As a student at Wilson, I wasn’t initially bothered by the lack of diversity on campus. Maybe in part, this was because I had gone to high school in Chambersburg and still had many friends of color locally. However, at Wilson, I could count on one hand the minority friends I had on campus. Many of my college peers asked me about black culture. I understand that most were genuinely curious and wanted to learn, but it was a burden too. I was just one person, and my opinion or beliefs couldn’t speak for every African-American person.

Later, I did become frustrated with the lack of diversity on campus. I noticed classmates trying to secretly look at me when certain topics were brought up in class. Even some professors wanted me to speak during those discussions, but why? Because I was the only black person in this class? Because they thought I was the token black girl?

Fast forward to 2015, and I was excited to start my new job as an admissions counselor at Wilson. My first two years were primarily spent in eastern Pennsylvania and various other states on the east coast. My first bad experience happened in New Jersey as I arrived at my hotel. As I was gathering my things, I heard a car being locked about four times. I turned around and saw an old white man staring at me and hitting his fob over and over. I looked at him confused, and he aggressively said, “YEAH!” and continued to lock it about four more times. Little did I know this was just a tiny fraction of what I would experience while working here.

In 2018 I was given the south-central Pennsylvania area, which is very different from eastern Pennsylvania. One morning at a high school in Lancaster, I had an eye-opening experience. I parked in the visitor spot and waited since I had gotten there a little early. I noticed a woman staring at me from a car parked a couple of spots away. I didn’t think anything of it. Time passed, and as I was about to head inside to my appointment, a cop pulled into the parking lot. The cop came over and said that a teacher (the woman who was in the other car) had reported a suspicious person in a vehicle outside the school. I was in a 2019 Dodge Challenger, and I was dressed very professionally. I looked around the empty parking lot and asked him where the suspicious person was because I was an admissions representative from a college. The cop quickly apologized for the misunderstanding and seemed a bit embarrassed. I was extremely angry, but of course, like with many other instances, I still had to do my job.

As an African-American woman, it is common for us to hold in our anger because we don’t want to fuel racism. We don’t want to be labeled “angry and obnoxious black woman” or worse, even though we are justified for feeling that way.

In another incident, I had a conversation with a college adviser at a private school in Harrisburg. I left feeling like we could have a good relationship with her school. Later, when I returned to the office, my boss asked me what had happened on this visit. He told me that the adviser had emailed the VP of Enrollment saying that I should be fired and not represent the school.

I was completely blindsided and confused and burst into tears. I didn’t understand why she would’ve gone out of her way to find out who the VP was and email him to try to get me fired. I didn’t under- stand what was negative about our conversation. I had updated her on new things at Wilson, she had told me about her school, and we had laughed. It was, like I said, a great conversation. This sort of thing has happened to me many times. Now I realize that these people are either racist or just miserable with their lives.

One day out of the blue, my boss pulled me into his office and said that he could see that I was having very different experiences than other admissions counselors in the office. He said that some of the things that people complained to him about me didn’t make sense and that he knew that I was having a more challenging time recruiting, especially in south-central Pennsylvania, because I was black.

I was surprised by this conversation because, as a black person, you are used to discrimination. We are used to unnecessary criticism, hate, and struggles because of the color of our skin. A few years ago, it was unusual for white people to hold others accountable for being racist or believing in stereotypes. My supervisor acknowledging this completely changed my opinion about him. He told me that he had seen how I am with families, so he knew for a fact that I was good at my job.

This conversation happened at a point when I was wondering if this profession was the one for me. I decided that it was the right career path for me, and I would not let small-town narrow-minded people affect what I enjoyed doing.

However, even on our campus, I have encountered uncomfortable situations — from students locking their cars five times when they see me to campus security following me into my office building to people asking me if I am lost. To end these sorts of negative encounters, we need more people of color on campus, and I don’t mean just students. Wilson needs people of color as faculty and staff because that will help students of color feel safe. I try to be there for the current students, but there is only so much one person can do.

If Wilson succeeds in becoming more diverse, the students will need people who can relate to their experiences and know what they are going through. As a student at Wilson, I didn’t have people like me to talk to about issues I’ve had due to being black. It really does go a long way to have authority figures who can relate to you.

With our new president, I can say that I do believe that Wilson is trying to change for the better. We are adding new committees and bringing clubs that have died down back to life. We are showing support for African-American alums and putting out more graphics and messages in support of black people. There are certain issues that can’t be fixed in the blink of an eye, but we are headed in the right direction. I believe we will succeed in making this campus a more welcoming and inclusive place for minorities.

I love Wilson and have spent a lot of my life on this campus, so I will do what I can to help current/future students feel seen, heard, and appreciated. My experience at Wilson has been unique, and it is refreshing to know that positive change is coming.