Even before the renovations began, “Sarah’s was starting to become a place where students could come together to enjoy time with one another,” Megan Potter ’20 said of the space in lower Lenfest Commons. “Every place on this campus tells a story and I wanted Sarah’s to start a new chapter.”

Vice President for Student Development Mary Beth Williams points to the project as proof that students have the power to inspire and empower one another. “My goal was to support the students in creating an artistic space,” she said. “They really have made something that people can use for years to come.”

The work began during the 2018 Spring Break after 2018-19 Wilson College Government Association President Daniel Perry ’20 and Daniel O’Keefe ’21 decided that the space wasn’t being used to its full potential. They wanted to transform it into a place where students would want to hang out, a visually appealing space and a place that could host events.

“We saw a lack of facilities for students,” Perry said. “We wanted to accommodate them and create a sense of unity. We wanted to create an environment that was more welcoming.” 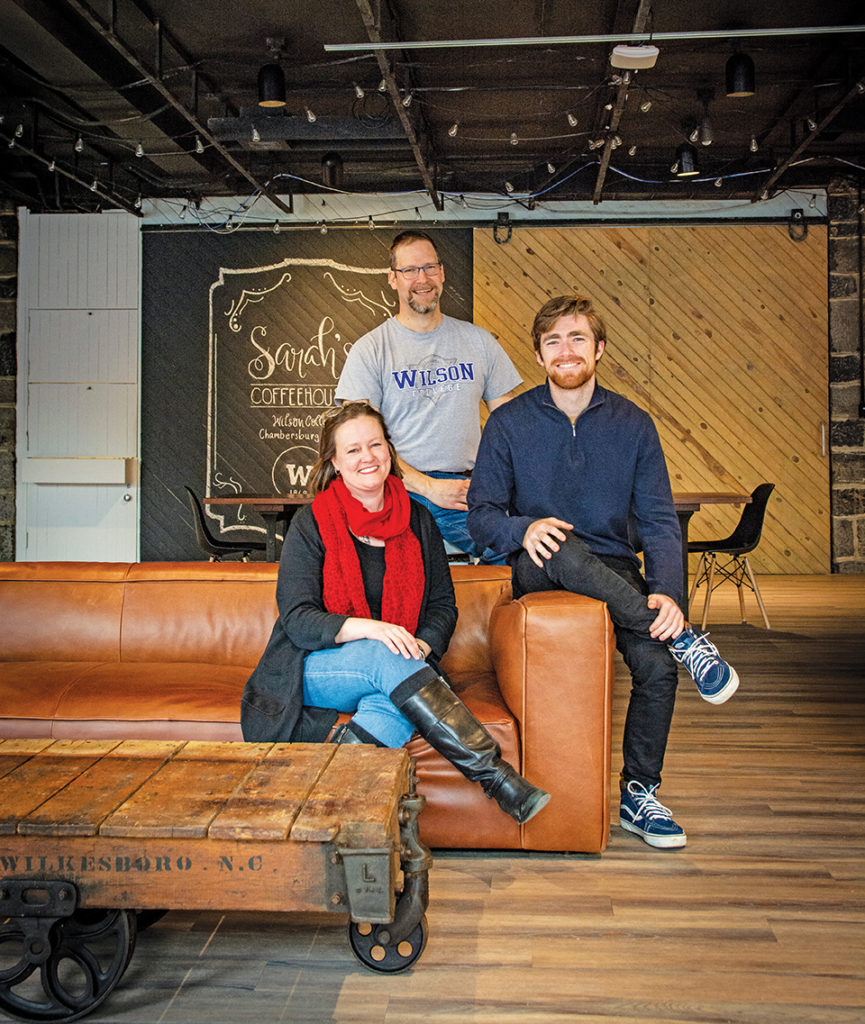 They approached Williams with their ideas. She approved and asked the Rev. Derek Wadlington to help the students make it happen. Wadlington has spent the past 12 months helping them with the renovations. “I wanted to see the space transformed and for the students to feel that their ideas mattered,” he said. “I thought the project would be useful in initiating change at Wilson.”

Using money provided by WCGA, students removed the nonstructural wooden beams from the ceiling to give the space a more expansive feeling; a contractor sandblasted the paint from the brick walls using a dustless process; workers removed carpet from the floor and replaced it with a durable vinyl that looks like wood; and a cleaning crew scrubbed the room.

The coffeehouse also has a small stage, industrial-style lighting, a chalkboard wall, upholstered sofas and chairs, as well as industrial-style tables, including some coffee tables and a 12-foot-long table made by local craftsman Barry Stup. Williams found out about him from a magazine and then visited his Chambersburg workshop, where he collects industrial pieces and refurbishes them. “They fit in really well with the theme we’re going for,” she said.

An antique espresso machine also graces the coffeehouse. It is ornamental only, but adds an authentic flavor to the space. O’Keefe and Potter found it online, bid on it and won. Then Perry, Wadlington and Williams made their way to Pittsburgh to pick it up. When they arrived, they found that the espresso machine had been sitting in a man’s house for 40 years after he bought it from a restaurant that had closed. “It’s very industrial and it helps bring everything together,” Williams said. “It really enhances the atmosphere here.”

“This was a great opportunity for students to learn and for the campus to come together,” Wadlington said.

With the renovations and furnishings complete, Sarah’s Coffeehouse was officially used for the first time by members of the Wilson Board of Trustees, who ate dinner there while they were on campus for the February board meeting.

The project initially brought the campus together to work toward a goal, and Perry believes that the refurbished space will help keep the community close. “This project means a lot to the students,” Perry said. “Changing the space into something new was uplifting, especially since it was built by students for students.”