Alexis Chick ’20 landed her dream internship this summer—she spent six weeks working with the veterinary staff at Pittsburgh Zoo. She cared for a six-inch leopard gecko, a chinchilla with protruding teeth, a 475-pound lion, a nearly two-ton white rhinoceros and many more of the zoo’s exotic residents.

Chick described it as a life-changing experience. 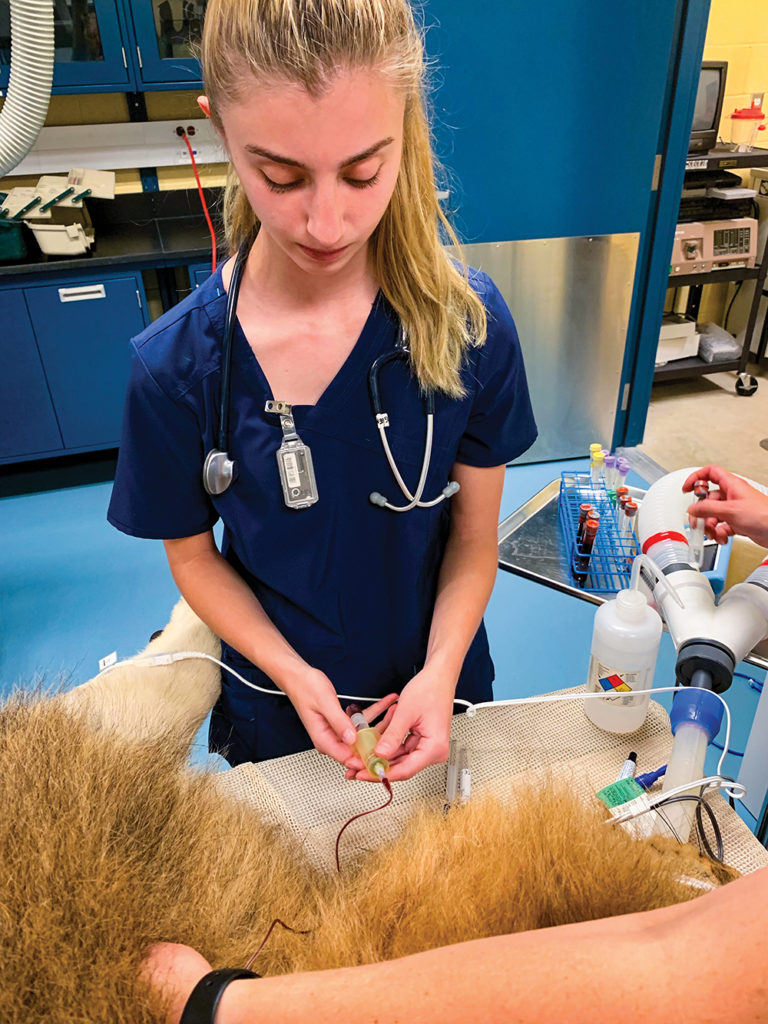 Her days started with a veterinary team meeting each morning, followed by the routine care of the animals in the intensive care unit and quarantine area (all new animals spend 30 days in quarantine). Chick bonded with a chinchilla that needed to have its teeth ground down. The little animal would bound over to her and eat a specially formulated food from her hand.

When zookeepers noticed their 15-year-old leopard gecko appeared not to be eating, Chick gave it a dose of barium—a white liquid that shows up on X-rays—and took scans at intervals to look for blockages in the digestive tract. Because geckos have a slow metabolism, the barium took more than a week to work its way through. Happily, there were no obstructions and the little animal began eating normally once more.

When a young rhino developed an infection on its tail, the challenge was psychological. The rhino’s mother did not like the veterinary staff and would not let them near her daughter. Chick and a veterinary technician visited them every day with treats for the mother and daughter. After a few days, the mother’s attitude improved enough to allow the team to treat her daughter.

Chick also got plenty of hands-on experience in the routine work of a vet tech. She drew blood from animals, including an anesthetized adult lion. His neck was all mane, and sticking a vein with a needle was very different than doing it with the dogs she had practiced on at Wilson. Nonetheless, she hit the vein the first time.

She tested numerous animals’ fecal samples for parasites. Chick’s lab classes at Wilson had prepared her to identify most of these parasites. She also monitored the vital statistics of animals under anesthesia to make sure they were not in danger. Throughout, she said, full-time staff supervised her and she never felt alone or given unclear instructions.

According to Chick, the most exciting animals she looked after were three lions that had just arrived from a game reserve in Africa. They were kept in quarantine throughout Chick’s six weeks at the zoo. The two females growled and roared whenever a person approached them. “I have never before looked into the eye of an animal that you know would kill you if there weren’t bars between you and it,” Chick said.

The male was a cat cut from a different cloth. He was very food-motivated and his keepers quickly target trained him, meaning he would follow certain orders in return for rewards. This training enables keepers and veterinary staff to get close enough to an animal to perform routine examinations without having to put the animal under anesthesia or put themselves in danger.

Chick learned a lot about animal care and medical treatment at the zoo.
However, her most important lesson—which she describes as life-changing—happened due to a tragic event.

The zoo had two 10-year-old male lions—brothers that had grown up there. One had been diagnosed with epilepsy at the age of three but his seizures had been successfully controlled by anti-epileptic drugs (AEDs). The weekend before Chick’s internship was to end, he had a severe seizure, fell and damaged his jaw. The vet managed to sedate him and make him comfortable. The following day Chick helped the veterinary team prepare to do a full exam and determine how serious his injuries were.

They pretreated the lion with an AED to prevent further seizures, then anesthetized him. Chick was monitoring his vitals when he began to seize. The vet increased the dose of AED, but he continued to seize on and off for a further 15 minutes. After examining his injuries and assessing his condition, the vet made the difficult decision that his injuries were so severe, it was best to euthanize him.

Chick recalls how devastated the veterinary staff and zookeepers were. Many had known this lion its whole life and were as emotionally attached to him as owners are to their pets. Yet, they all agreed with the vet’s assessment.

Chick was present for the euthanasia. It was a crucial lesson for her. Chick learned the importance of being able to empathize with others. She understood that an important part of the vet tech’s job is helping owners deal with the loss of an animal, so she was glad she experienced the death of an animal for the first time as an intern rather than after she graduated. “If you can’t deal with animals dying, you can’t do this job,” she said. Although she cried, she learned that she was able to perform her duties even under emotionally trying circumstances. “I was happy I had that experience no matter how sad it was,” she said. “It was super important for me to see I could do that.”