The scent of onions, peppers, tomatoes and radishes complements the aroma of fresh soil and compost as student workers organize and stack vegetables for the Wilson College farm stand, which serves the campus and the local community by providing fresh produce grown at the Fulton Farm.

The stand has changed since its inception in 2011, including switching locations. “We were down at the North Square Farmers Market in town for many years before our farm stand,” said Chris Mayer, director of the Fulton Center for Sustainability Studies. “We did a good job serving the community down there, but we weren’t serving our campus that well. We started looking for ways to meet the needs of both the students and the outside community, and creating a farm stand on campus was an easy way to do that.” 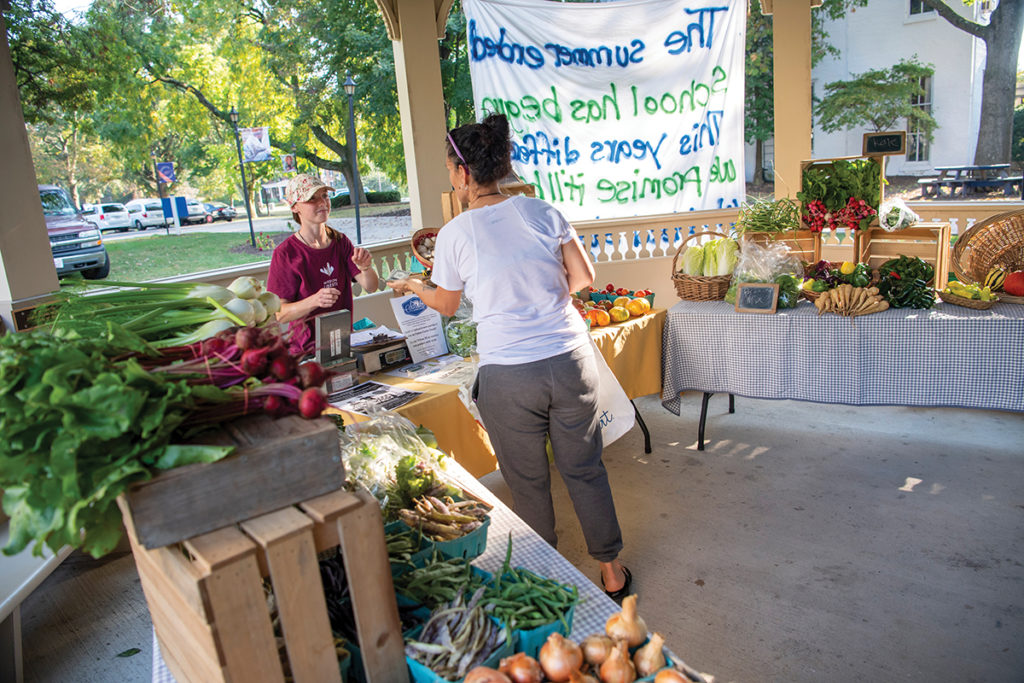 Starting in February, the College began participating in a new winter, indoor farmers market held inside the Coyle Public Library in downtown Chambersburg. The venture, an initiative of the North Square Farmers Market, is open from 9 a.m. to noon on the first and third Saturdays of every month through April.

For the first time, the campus stand— which operates from 3 to 5 p.m. in front of or inside (in winter) Lenfest Commons—will stay open through most of the year, according to Mayer. “We have the ability to grow food year-round here,” she said.

With the help of student volunteers, college farmer Daniel Emig can grow rows of kale, chard, lettuce, spinach, carrots, beets and turnips in large, temperature-controlled greenhouse tunnels through most of the winter. He also grows storage crops like potatoes, garlic, sun chokes and onions in order to provide produce during the colder months. “We can’t grow all of our produce each season, but it is my hope to have a selection of fresh produce at all times,” Emig said.

The change to year-round service has had an impact on both the campus and the community. “It’s really convenient that we don’t have to travel far for fresh produce, especially since it’s open almost every week,” said Jillian Hubert ’21, a regular customer at the stand. Linda Boeckman, director of career development and another regular at the stand, also believes that this change is important for the College. “I think encouraging healthy eating can only have a positive effect on our campus,” she said. “In addition, the stand brings so many people from the outside community here, some even as far as Hagerstown [Md.]. It’s nice that the stand is touching not only our college, but others outside of the College as well.”

Student workers at the stand also feel as though they’ve had an effect on the campus. “I work at the farm stand to get to know others interested in local agriculture in the community,” said Ethan Kron ’20. “The farm stand here is great because it serves as a hub for our community, but also an outlet for produce that some people might not have access to. It’s cool to be so connected to so many different people.”

The stand is organized into sections, with everything arranged in order to catch people’s eyes, according to Mayer. “When I go, I always think that the layout and presentation is nice,” Boeckman said. “There’s such diversity in what we can buy, and we can really see that with the way the produce is displayed.”

The farm supplies both the stand and the Jensen Dining Hall with produce, as well as Sarah’s Cupboard, the campus food bank. In addition, students experiencing food insecurity or who may not have enough money to purchase fresh produce otherwise, are able to use their balance from Sarah’s Cupboard at the stand directly. All they have to do is present their college ID; then choose the produce that best suits their needs and tastes.

The stand has been averaging about 20 patrons a week and offering about 25 different kinds of produce, Mayer said. “From my point of view, it’s all about educating people who visit us,” she said. “Even if they come and don’t buy anything, at least if they stop by, we can talk to them and try to educate them on how important it can be to buy fresh, local produce. We’re working hard, so it’s great when we can see how much we’re impacting everyone.”

Learn more about the farm at wilson.edu/fulton-farm