The Class of 2021 celebrates Commencement.

On Sunday, May 16, on the sun-speckled Main Green and with a gentle breeze keeping the temperatures pleasant, the class of 2021 celebrated their graduation. After over a year of pandemic-related restrictions, it felt like a victory to hold commencement in person. And to see smiling, joyful unmasked faces was an unexpected bonus. Only two days earlier, the COVID-19 masking requirements for gatherings were partially lifted — participants and audience could attend without wearing masks if fully vaccinated. 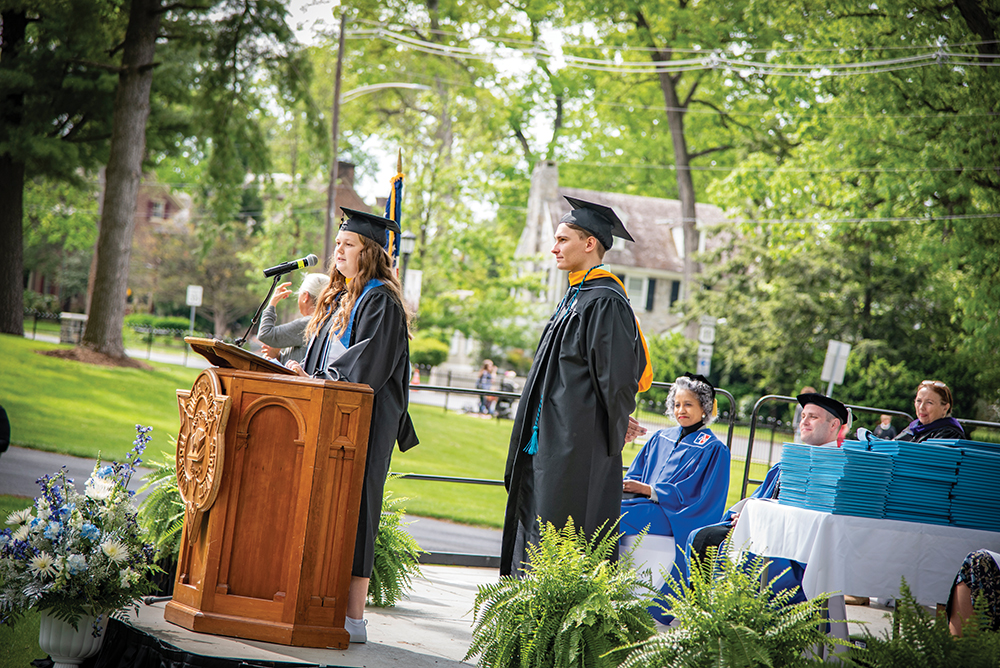 President Wesley R. Fugate, Ph.D., welcomed the class and guests. Then Danielle Stafford, the class president, greeted her fellow graduates. She told them, “I arrived at Wilson a shy freshie who did not know what she wanted to do with her life.” Whereas now, after four years at the College, the experiences here had “allowed me to be the person I wanted to be.” She told her classmates to follow their own paths — unless, she joked, they were lost in the woods, in which case, they could follow a marked path. 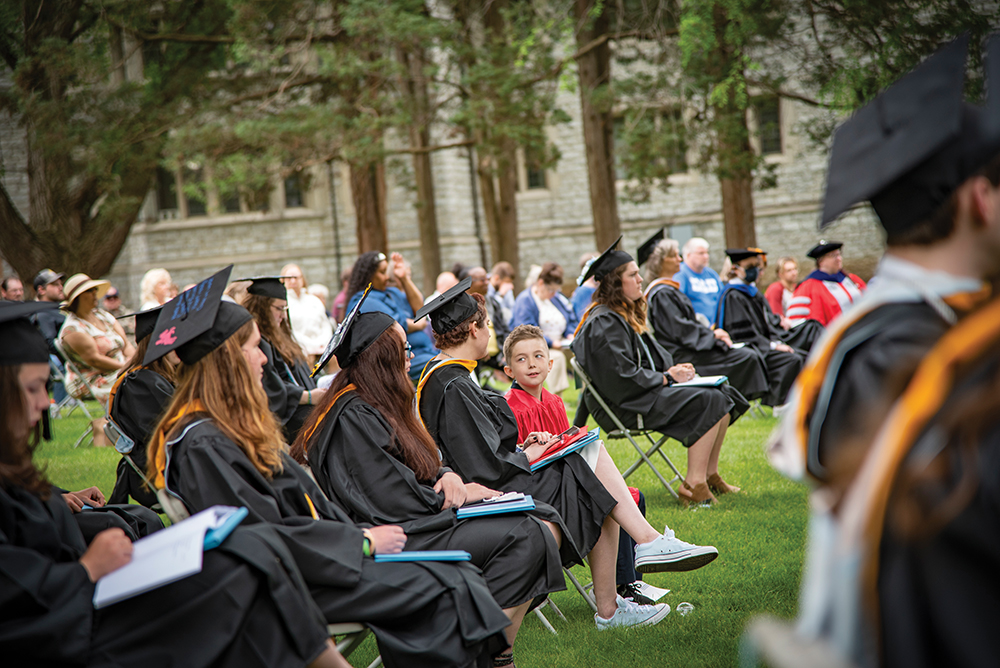 Dawson Zalegowski, the class vice president, congratulated the class and told them how they all shared the memories of “our Wilson.” He announced their class gift was a contribution to the renovation expenses for Jensen Dining Hall.

Sykes told the class that of all the things she had experienced over a long career in academia and public service, what was most rewarding was being able to communicate directly with the young women and men who would shape the future. In reference to the class’s experience with the pandemic, she quoted from the great African American author Maya Angelou, “You may not control all the events that happen to you, but you can decide not to be reduced by them.” 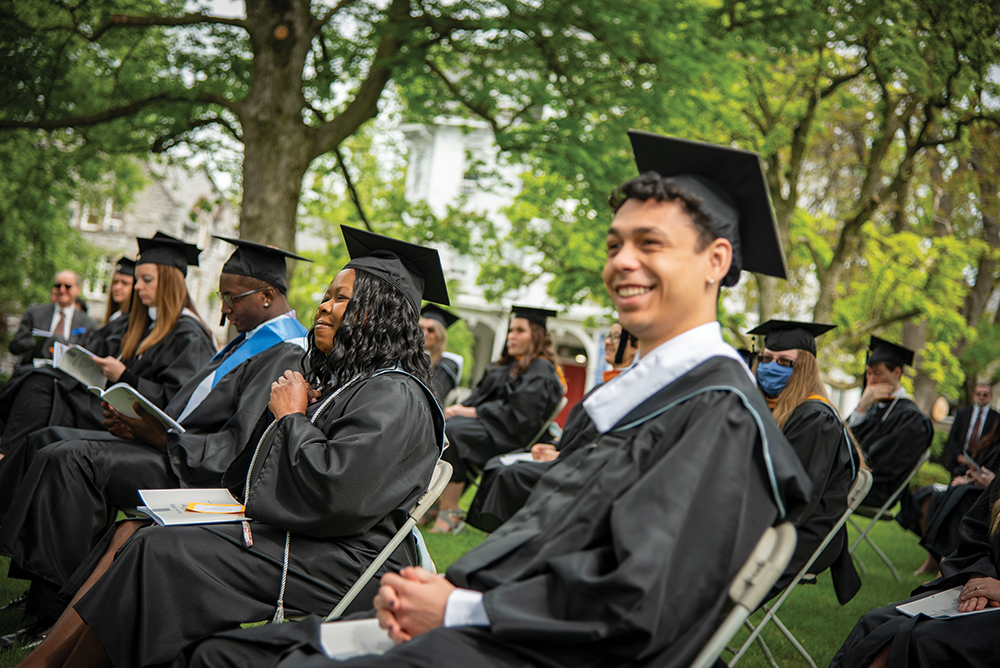 “My advice to each of you is simple and straightforward,” she said. “With outcomes you can’t possibly imagine, be confident and bold in the choices you make. It’s why I believe the proverb, fortune favors the bold, are among the truest words ever spoken.”

“Dream big; dream bold thoughts,” she advised. “Take risks and do what you know in your heart is the right thing.

Sykes concluded by saying she knew it would be a long path back to normal. However, a return to the pre-pandemic normal was not ambitious enough. The graduates should look to the future and “don’t accept the new normal; build the new better.” 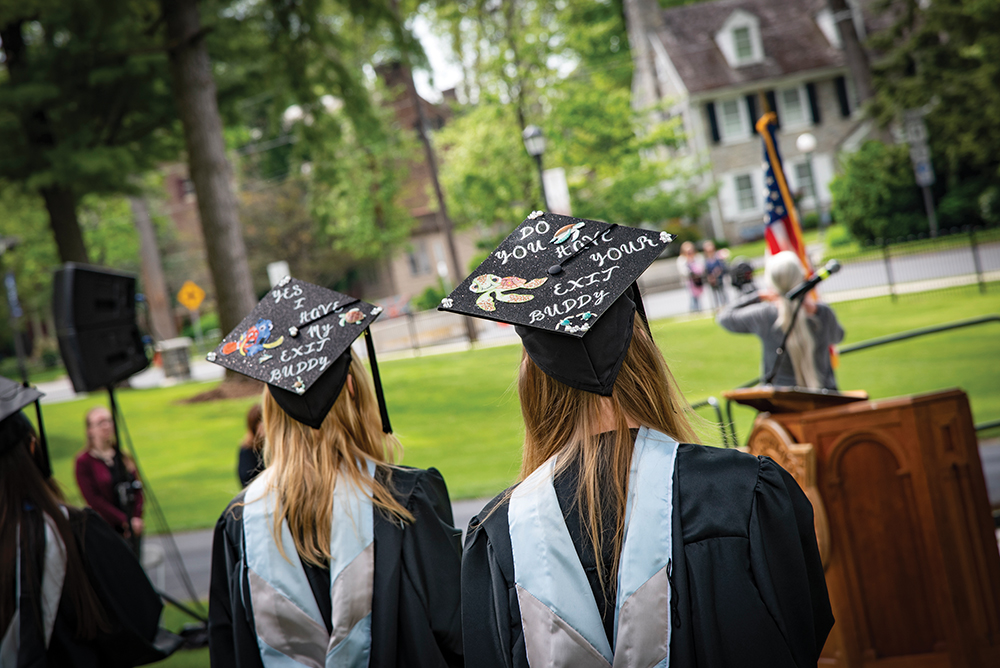 After the class was presented with their diplomas by Fugate, he spoke to them about their time at Wilson and the memories they had of the College. He asked them to go out into the world and be difference-makers. And he reminded them to return to Wilson and return often. Wilson was their family and would always be there for them.