Wilson’s Fulton Farm not only grows raw materials but often provides the know-how to turn them into delicious dishes. Recently there have been workshops on making paprika, foraging for mushrooms, and making your own kimchi. 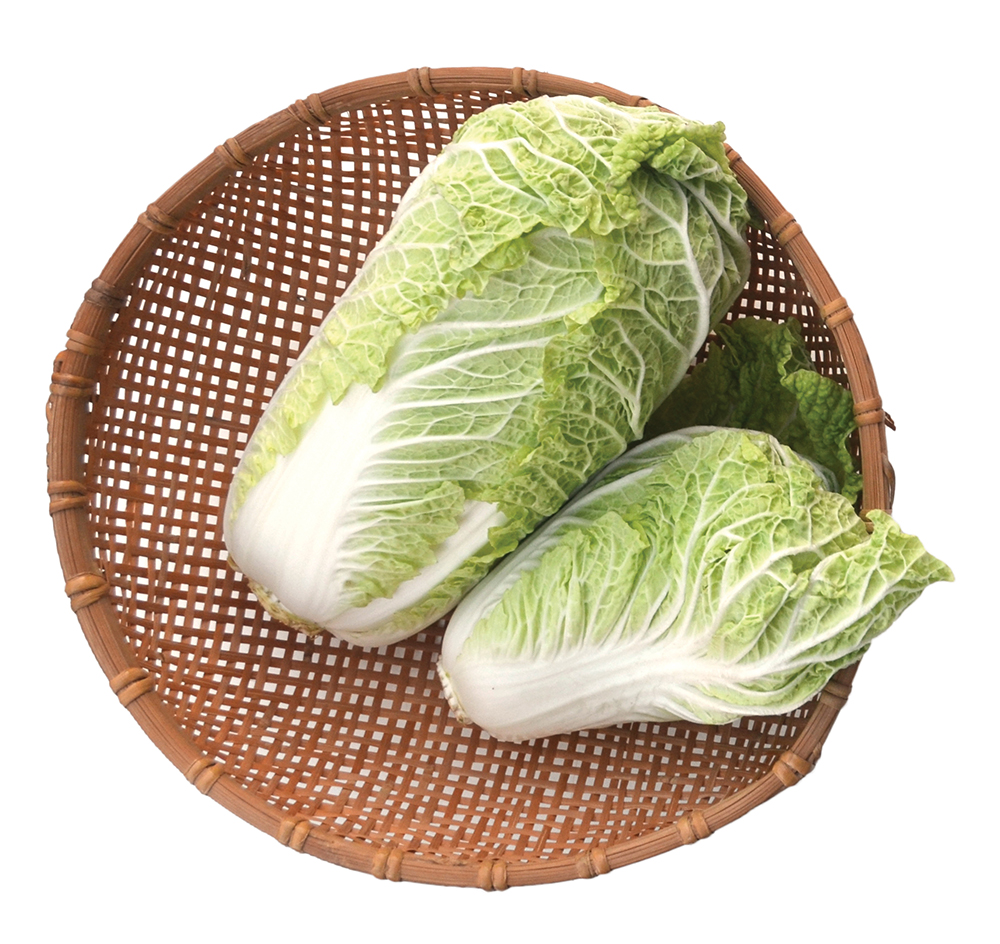 The kimchi workshop was held in the fall after the farm’s napa cabbage had been freshly picked. Kimchi fans from the College and local community gathered to create this spicy dish together, much like it was once made by the women in Korean villages — as a team effort.

Kimchi is essentially salted and fermented vegetables. It comes in many different varieties because you can ferment so many different vegetables, such as napa cabbage, daikon radish, cucumbers, green onions, and more. The seasonings added to kimchi give it its kick. 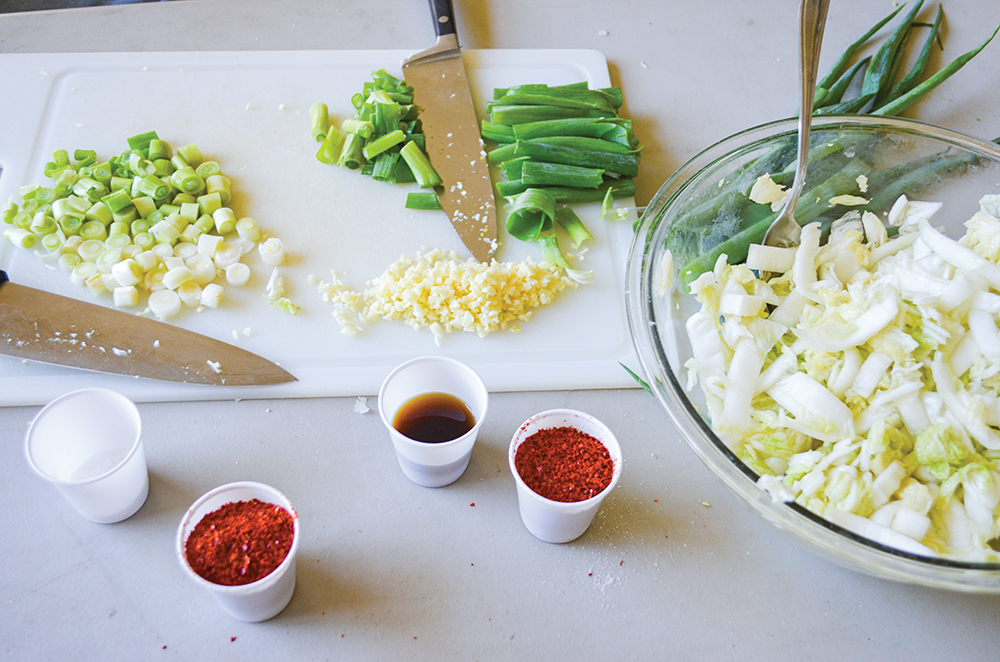 Just as it seems everyone has their own chili recipe, kimchi recipes are as unique as the person making them. Typical seasonings include gochugaru (Korean chili powder), green onions, garlic, ginger, and seafood sauce. However, what you include, exclude, or add is up to you. Some people exclude ginger; others add secret ingredients like sugar or even 7-Up soda. One thing is for sure — you cannot substitute Korean chili powder for American or Mexican chili powder as they are pretty different.

Kimchi has risen in popularity in the United States, and for a good reason. Kimchi is full of probiotics and high in fiber, vitamins A, B, and C, while low in calories and fat. Koreans have known this for millennia — there are records of pickling vegetables in Korea as early as 37 BC. But the spiciness did not show up until the 1600s when Portuguese traders brought chili peppers from the Americas. 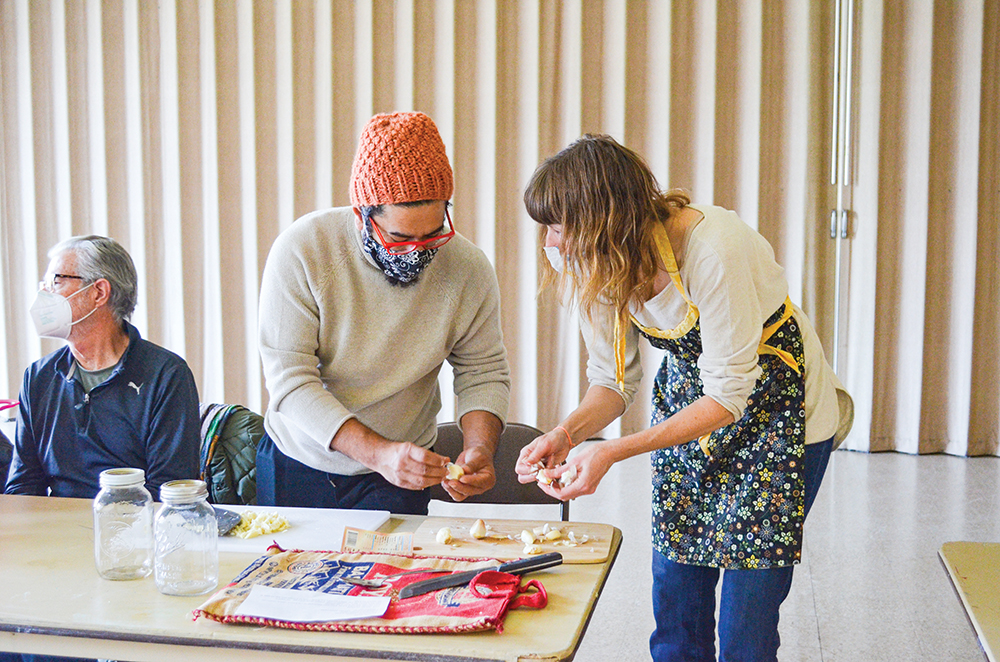 Fermented food was a boon in the days before refrigeration because it lasted for a long time. Kimchi was made and stored in large earthenware jars called “onggi” and buried in the ground. It wouldn’t freeze in the winter, and it stayed cool in the summer. Today, modern Korean families often have a special refrigerator just for kimchi.

Most Koreans eat kimchi with ever y meal or at least once a day. It is usually eaten as a side dish or “banchan.” One and half billion tons of kimchi are eaten each year. Kimchi can also be used to create other dishes such as “kimchijeon” (a type of kimchi pancake), stews, or kimchi fried rice. 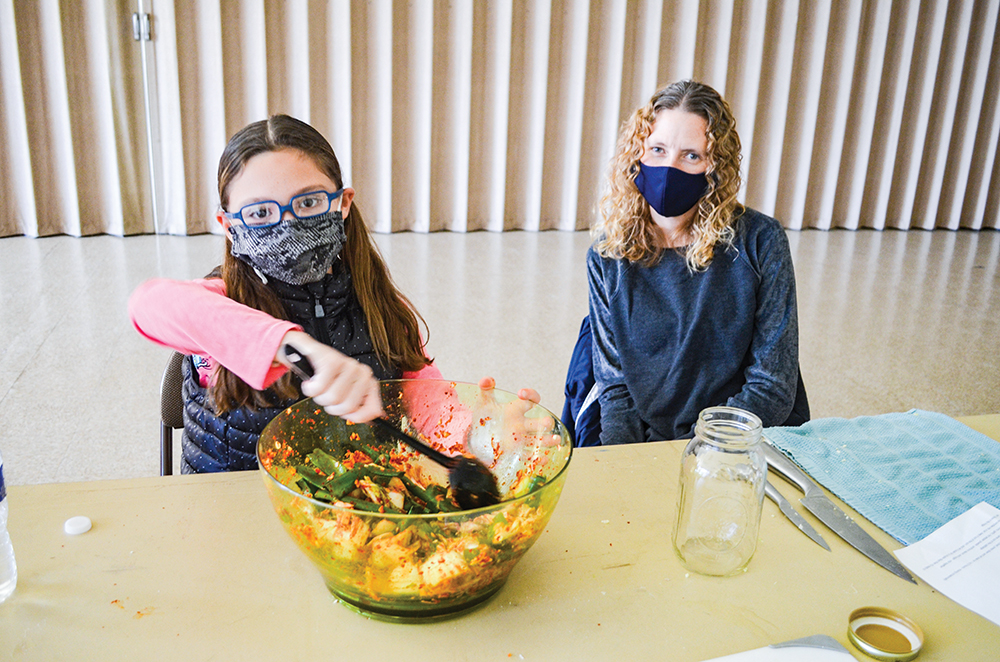 Kimchi has even been served in outer space. In 2008, astronaut Yi So-Yeon became the first Korean in space. She joined the International Space Station and took kimchi with her. South Korean scientists had to create a special bacteria-free kimchi recipe, “Space Kimchi.” While here on Earth, you need bacteria for fermentation. In space, cosmic radiation could cause the bacteria to mutate or grow until the container explodes.

Note: if a jar of kimchi is packed too tightly and does not have a way to let the fermentation gases escape, you can have a kimchi explosion in your own kitchen here on Earth. One of the workshop attendees learned this the hard way. (No one was harmed in this mishap, but floors, ceilings, and cabinets had to be scrubbed of kimchi debris.) 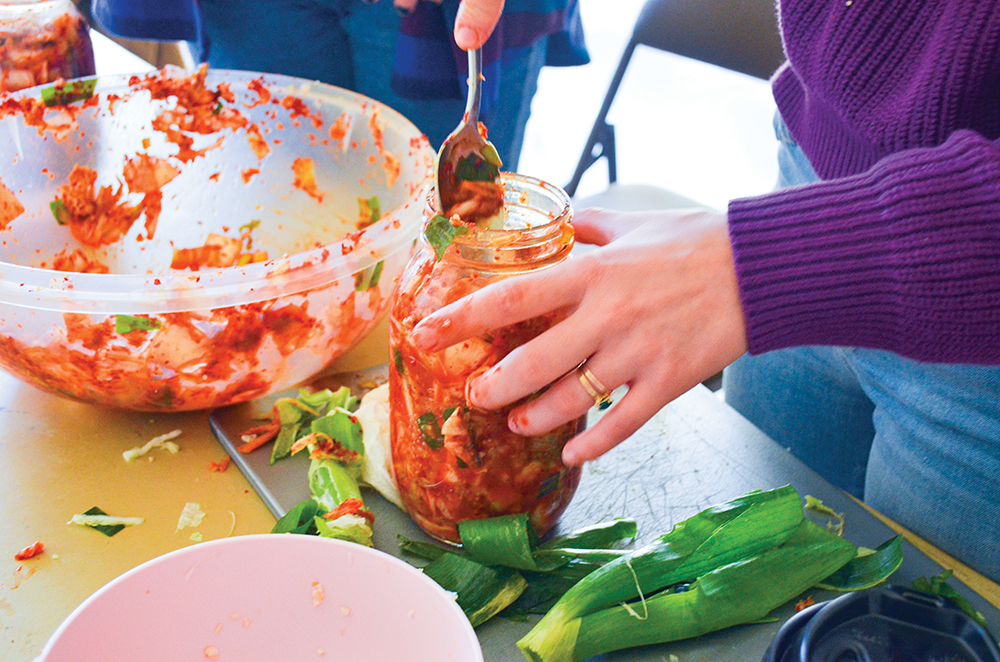 Layer the cabbage with salt in a bowl, press down, and let soak for 1 to 2 hours — mixing occasionally.

Drain the water that came out of the cabbage.

Add green onions, garlic, hot pepper powder, anchovy sauce, and sugar, then mix together. Pack the kimchi into a jar, leaving one inch of space at the top. Place the jar in a cool, dry spot out of the sun, and let it soak for a couple of days, then it’s ready to eat. Store in the fridge.