Molly Lemke ’20 drew inspiration for a new student organization from something that happened when she was a teenager: She rescued a 10-day-old kitten she found in her backyard. “It was a really transformative experience to care for something that vulnerable,” Lemke said.

Now, more than a year after the Wilson Animal Action Group was founded, the group has 10 active members and has raised money for animal groups and lobbied for animal rights reforms in the Pennsylvania legislature. “Our mission is to make animal lives better through advocacy,” said Lemke. Although WAAG is still a young organization, she is happy with the group’s progress.

“There are a lot of animal issues that our campus isn’t aware of despite being an animal-friendly campus,” she said. Lemke and the other members of WAAG are working to increase awareness of inhumane practices involving animals on both the local and national levels. “Puppy mills feeding local pet stores with animals is a huge problem in this area,” she said. “Dog fighting is also a lot more prevalent than people think it is,” she said, citing a national issue the group wants to highlight, “which is due to the fact that our country doesn’t have a lot of animal regulations set in place.”

The one piece of federal legislation that covers animals, the Animal Welfare Act, has a lot of gaps in it, according to Lemke. “There are no countrywide animal cruelty regulations,” she said. “In addition, in many communities, there is no one to enforce these laws (except for) the state police, who may not consider animal cruelty problems a real issue.”

Lemke, who is majoring in animal studies and veterinary medical technology, attended a talk on campus given by Kristen Tullo, Humane Society of the United States (HSUS) Pennsylvania state director, in fall 2017. After hearing Tullo speak, Lemke knew she needed to get more involved in animal advocacy. She created WAAG as a result.

In April 2018, WAAG members attended HSUS-sponsored Humane Lobby Day, which takes place in every state, at the Pennsylvania capitol in Harrisburg. Students met with legislators and spoke about animal welfare issues and laws. “It really felt as though we were making a difference by being there,” said Lemke. 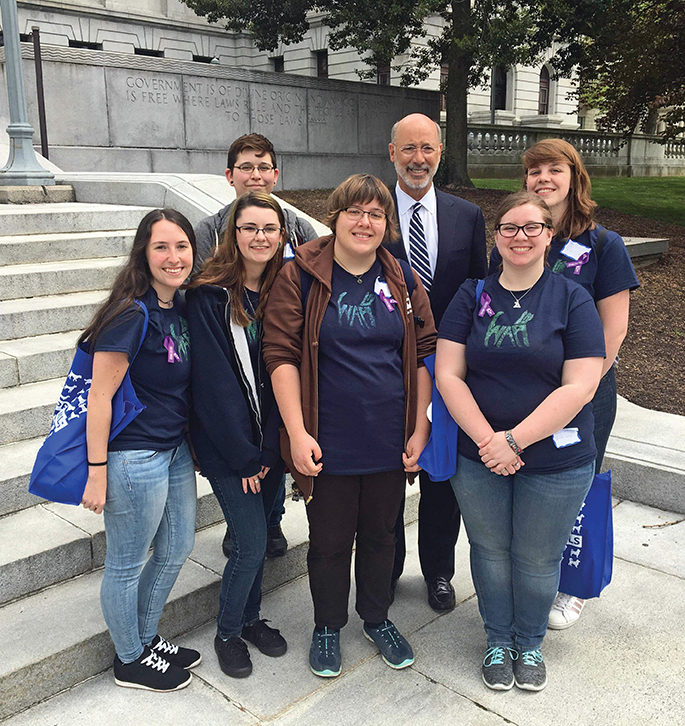 The group sent a contingent again this year on April 29 and were photographed with Pennsylvania Gov. Tom Wolf and canine celebrities Aladdin and Libre, both of whom suffered abuse before being rescued.

“The big issue that they’re pushing for this year at lobby day is Victoria’s Law,” Lemke said. “The bill would ban the retail sale of dogs, cats and rabbits in the state.” WAAG members took a petition to Humane Lobby Day supporting the passage of Victoria’s Law with 281 signatures they gathered outside the dining hall this spring.

The club also supports another proposal, the “hot car” bill, which would give police immunity if they break into a car to rescue an animal locked inside, according to Lemke.

The lobby day is WAAG’s main focus, but the club also hosts fundraising events on campus. During the 2018 spring semester, the group created a Valentine’s donation drive and collected toys and cleaning supplies for the Cumberland Valley Animal Shelter and for Spring Fling, the group turned donated shirts into dog toys and gave them to the local animal shelter. In fall 2018, they hosted a Halloween animal costume contest on campus and baked hundreds of treats for a trick-or-treat event for pets.

The club has also donated winter shelters for feral cats to local businesses. Lemke believes one reason the group is successful is that they all share the same goal. “We all feel as though we created domestic animals so we have a responsibility to take care of them,” she said. “If they live with you, they’re just as much a part of your family as anyone else.”

Lemke also wants to encourage the entire Wilson community to do what they can for animals. “Science keeps discovering that every animal is essentially the same as we are. Their cognitive skills, their emotions … we’re all built from the same mold. It’s not a far leap to have empathy for them and help them as much as possible.”