This alumna found her career in business thanks to the flexibility of a liberal arts education.

After a youth spent reading the James Herriot books about his life as a veterinarian in Yorkshire, Jennifer Banzhof ’94 was determined to become a vet. 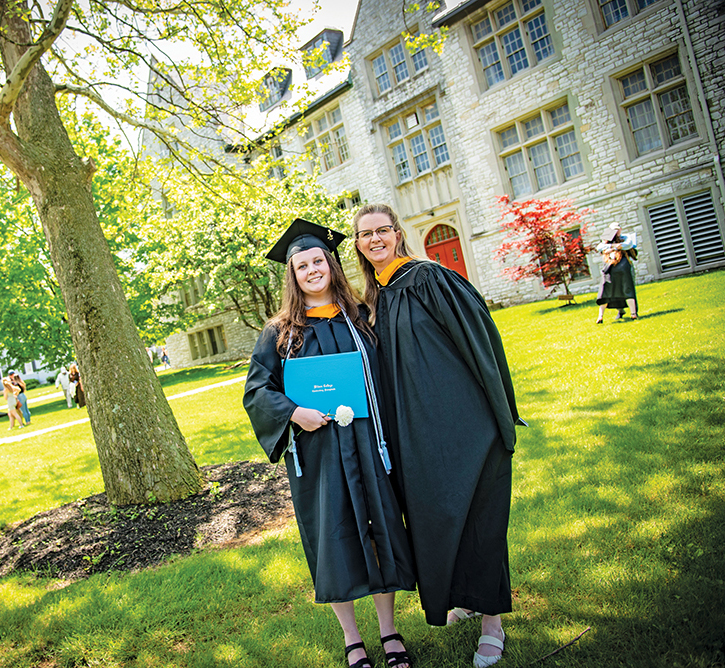 Luckily for Wilson, she also wanted to ride competitively. She became interested in the College when she learned of our equestrian program, became even more curious when she discovered that she could keep her horse with her, and became convinced it was the place for her when she visited campus. “Everyone was so friendly; I got that wonderful feeling that this is home.”

Thanks to her excellent grades, she was awarded a full Sarah Wilson Scholarship. All she had to do was maintain a 3.4 GPA — not an issue for someone with her academic strengths, or so she thought.

Unluckily for Banzhof (and perhaps luckily for large animals), the natural sciences did not come “naturally” to her, and she had to switch majors or risk losing the scholarship. It was an end to her veterinarian dream, but she recognized that she was a mediocre scientist at best.

“The beauty of the liberal arts is that you are exposed to different subjects and find something that clicks with how your mind works,” she said. “I hit statistics, and they clicked. I completely get stats!” This revelation spurred her pivot from a biology major to a business and economics major.

Like her path to statistics, her journey into the business world meant learning what she was good at by finding out what she was terrible at. After graduation, she went to Atlanta planning to work for Emory University, where, as an employee, she could pursue a master’s in health administration for free. Unluckily for Banzhof, jobs at Emory were few and far between. “After being in Atlanta for a huge amount of time — two weeks — I took a job as a secretary for a third-party administrator of employee benefits plans,” she said. “But I was the world’s worst secretary.”

Luckily, Consolidated Benefits Services saw potential in her and moved her to their consulting department. She has never looked back. “The liberal arts prepare you for this sort of thing. I ended up in a position where I have to do a lot of math and statistics, which is great, but I also do a lot of critical thinking and research, and every day is just a little bit different in what I do. I couldn’t have had a better background for it.”

Today Banzhof and J. Scott Haynsworth own BHA Consulting LLC — an employee benefit consulting and actuarial firm. There she specializes in employee benefits and negotiating contracts between employers and employees.

Discovering that statistics were her thing was important. But equally important, Wilson taught her the interpersonal and speaking skills crucial to her job. “My mother used to say, I can’t believe you have a job where you talk to people for a living,” she said. “I was the kid in high school who never said anything. I came to Wilson, and you had to talk because there were not enough people in the classes for you not to talk. And I found out people will listen when you talk and have good things to say. Without that, I would not be here today. I would not own a business. So, I feel I owe it to Wilson to give back.”

And she certainly has given back generously. Apart from her many financial gifts to the College, Banzhof has contributed her time and energy. She served on the board of the AAWC and, for the past nine years, as a Trustee of the College. Her latest act of generosity, a gift of $22,000 to the Wilson Fund, is to celebrate her daughter’s graduation as a member of the Class of 2022.
Delaney Banzhof ’22 followed in her mother’s footsteps reluctantly. She only visited Wilson because her mother said, “I’m on the Board of Trustees, and it would look bad if you didn’t at least do the admissions tour. Do the tour, and I won’t say another word, I promise.”

“We went back to the hotel afterward, and [Delaney] looked sort of upset. She said to me, ‘You know, I really loved it. It felt like home. I really think this is where I want to go.’” After that, it was hard to get Delaney to even apply elsewhere. And Delaney Banzhof, like her mother, thrived at Wilson.

Seeing her daughter succeed inspired Banzhof’s latest gift. “There are so many students out there that would thrive in Wilson’s supportive, close-knit community that would struggle or just get by in other environments. Celebrating my daughter’s graduation is a great reason to give to Wilson, but it is also timely. Wilson needs our support now.”

2022 sees mother and daughter graduate — one with a degree and the other from the Board of Trustees. The College will miss their energy and commitment, but we suspect this is not the last we will see of the Banzhof women.